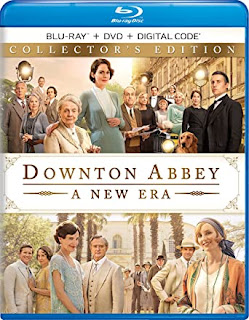 Here’s how well Downton Abbey: A New Era works as a movie…

Despite its popularity, I have never seen a single episode of the original series, nor was I ever compelled to. And at the risk of sounding ignorantly presumptuous, a series chronicling the first-world problems of a batch of English aristocrats sounded about as entertaining as watching a test pattern. So obviously, the first Downton Abbey movie never earned a spot on my gotta-see list.

But as a sequel to a film I’ve never seen, based on a TV show I never watched, Downton Abbey: A New Era is wonderful and I’m shocked at how much I enjoyed it. Best of all, no masters degree in Grantham history is required. Pretty much every character returns for another go ‘round, and while I suppose being already familiar with them - and their pasts - helps a little bit, the film as-a-whole doesn’t operate on the conceit that we are. Series creator & screenwriter Julian Fellowes deftly establishes each character’s role in the family - as well as the quirks which make them endearing - within the first act, without relying on shout-outs to what’s already transpired. Quite an astonishing feat when you think about it.

Two primary storylines run concurrently through the film. The first has Crawley matriarch Violet (Maggie Smith) receiving the news that she just inherited a French Villa owned by  Marquis de Montirail, with whom she had a brief relationship several decades ago. Despite protest by the Marquis’ widow, Violet intends to accept the villa and bequeath it to her great-granddaughter, Sybbie. The family is invited to the villa, where Violet’s son, Robert (Hugh Bonneville), is led to suspect he might actually be the Marquis’ son. This obviously doesn’t sit well with him, nor does the news from his wife, Cora (Elizabeth McGovern), that she is gravely ill.

The second, more amusing story involves a studio wishing to use Downton Abbey as the setting for a new movie starring two silent film heartthrobs. While much of the staff is excited, not everyone in the house is happy about the intrusion (leading to many charmingly humorous moments). Still, the Abbey could use some renovations and the money would come in handy.

When the sudden boom of “talkies” threatens the production, Lady Mary (Michelle Dockery) suggests to director Jack Barber (Hugh Darcy) that they turn his film into one. Unfortunately, self-absorbed star Gladys Denker (Sue Johnston) is somewhat vocally challenged - to say the least - so Barber coerces Mary into providing the voiceover. Barber is also sort-of sweet on Mary, and since her husband, Henry, is largely absent all the time, the feeling might be mutual.

Interspersed are many scenes and side stories giving just about every character their moment in the spotlight. To this newbie’s surprise, they’re all pretty interesting and likable. Even the closest the film has to an antagonist - Gladys Denker - ends up as someone we sympathize with. The story isn’t heavy with conflict and most of it is wrapped up pretty neatly (maybe too neatly, in some cases), but for the most part, we simply enjoy being around these people. Despite their lifestyle, they’re generally pretty relatable.

The performances are uniformly congenial. Maggie Smith, in particular, effortlessly steals every scene she’s in and her character, Violet, is not only the tie which binds the family, her story becomes the crux of the entire film. Hence, the poignant conclusion will certainly be moving to longtime fans. Hell, I barely knew her and I found myself getting a little misty.

Downton Abbey: A New Era works wonderfully as both a continuation of the franchise and a stand-alone film. As a newcomer, I’m not sure if I’m yet-ready to dive into six seasons of the original show, but this one definitely has sparked my interest in checking out the first film. I really enjoyed meeting these characters and am more than happy to visit them again.

FEATURETTES - “Good to be Back” (cast members talk about reuniting for another movie); “Return to Downton Abbey: The Making of A New Era”; “A Legendary Character” (an appreciation of Maggie Smith); “Creating the Film Within a Film”; “Her Majesty’s Yacht Britannia” (cast & crew discuss being aloud to film a scene on the Queen’s boat); “Spill the Tea”