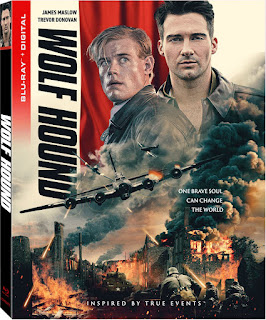 The title refers to what the Nazis called stolen allied aircraft they’d use against their enemies - mostly the British - during World War II. After shooting one down, they’d fix it up, stick in German pilots and strike before anyone was even aware of the ruse. So Wolf Hound is, of course, “inspired by true events,” though I suspect the only thing true about this story is the concept they built it around.

But we didn’t sign up for a history lesson, which is a good thing because Wolf Hound appears more inspired by old war movies than any actual war. Aside from some expletives, squibs and a few other modern trappings, this could have been something RKO cranked out in the ‘50s. The good guys spout stuff like  “Auf wiedersehen, you son of a bitch” and “This is how we do it in Brooklyn!”, while the Nazis are all overconfident, sneering and such lousy shots they make Imperial Stormtroopers look like Chris Kyle.

Still, they do manage to shoot down an American bomber, which they plan on using to drop a super-bomb on London. That is, unless fighter pilot David Holden (who was also shot down) can sneak onto the base, rescue the bomber crew and take back the plane. Standing in his way are seething Nazi pilot Erich Roth (Trevor Donovan) and granite-jawed Colonel Krieger (John Turk), who looks like Dolph Lundgren swallowed another Dolph Lundgren.

There’s plenty of fiery conflict both on and off the ground, though little real tension. Despite our stoic heroes practically taking on the entire Luftwaffe, the outcome is almost never in doubt. But there’s one aspect to Wolf Hound that’s pretty unique these days; rather than relying on CGI, the aerial scenes are mostly created with real planes and good old-fashioned miniatures. The results may not be hyperkinetic eye candy, but at least we don’t feel like we’re watching someone else play a video game.

Considering almost no time is spent on characterization, Wolf Hound has no business dragging things out for 130 minutes, especially during the needlessly protracted climax. But despite some eye-rolling moments - mostly the dialogue - the film displays an old school earnestness that’s fairly entertaining...and it’s always fun watching Nazis get blown up.