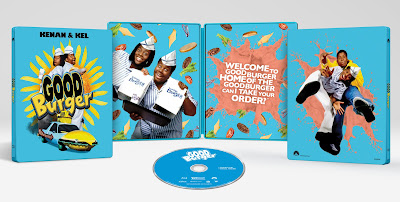 You gotta hand it to Nickelodeon for one thing…they managed something in the ‘90s Saturday Night Live was never able to do: Make a genuinely funny movie based on a five minute comedy sketch. Granted, it helped if you were 11 years old, but at a time when even Disney had long-since given-up cranking-out innocuous live-action kid comedies, a movie like Good Burger must have seemed like a breath of fresh air.

I say “must have” because in 1997, I was at-least generation beyond the film’s intended audience and ignored it. But watching it 25 years later for the purpose of this review, I was immediately reminded of the old live-action Disney years, when Mom & Dad would dutifully take us to such flicks as Freaky Friday and The Strongest Man in the World. None of them would ever be mistaken for classics, but they were harmless fun back then.

Like those films, I wouldn’t necessarily call Good Burger a product of its time…more of a product of its audience’s time. Viewed in that context, the movie remains pretty damned funny for what it is, something you can’t say about, say, Space Jam (which has aged terribly). Kenan & Kel are likably goofy and the plot - while nothing particularly original - provides a solid springboard for their juvenile antics. But truth be told, even though this writer is well into middle age, several moments had me laughing out loud.

The kids who loved Good Burger back in the day are now in their mid-30s, so the nostalgic appeal for this one will obviously be high and a Blu-ray SteelBook makes a nifty blast from the past for those who enjoy collecting relics of their youth. For those who’ve since become parents themselves, Good Burger’s good-natured buffoonery is likely to tickle their kids’ funny bones, as well, despite not even knowing who Kenan & Kel were. Why not pass it along?

ORIGINAL “GOOD BURGER” SKETCH - From the series, All That.