EDGE OF TOMORROW: The One Where Tom Cruise Fights Aliens...in 4K 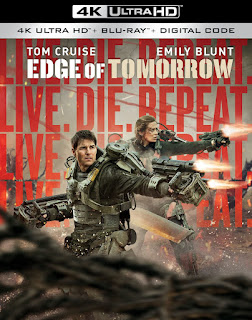 I never cared for most of Tom Cruise's early career (not even Top Gun), unable to escape the notion that his roles were customized to fit the image he had of himself. Even in the more "prestigious" movies where he attempts to be taken seriously as an actor, his meticulously self-cultivated persona makes that impossible. He's simply too Tom Cruisey to be accepted as anything else.

He must have come to the same conclusion years ago and finally dropped all pretenses of being anything other than TOM CRUISE, which nobody does better. I've grown to appreciate that and have really enjoyed most of his 21st Century films, which could just-as-accurately be titled like Friends episodes: The One Where Tom Cruise Rides a Bus, The One Where Tom Cruise Fights the Undead, The One Where Tom Cruise Dangles from a Plane, The One Where Tom Cruise Hunts Hitler, etc. Without really stretching himself, Cruise has evolved into a superlative action star. Not only that, these movies are remarkably consistent because we never question his utter dedication (something we could never say about Bruce Willis). Even in such marginal movies as Knight and Day & Oblivion, we're certain Cruise is giving it everything he's got.

That being said, 2014’s Edge of Tomorrow is the best Tom Cruise movie of the past decade that doesn’t have Mission: Impossible in the title. Not to be confused with The One Where Tom Cruise Runs from Aliens (War of the Worlds), this is The One Where Tom Cruise Fights Aliens. But in addition to featuring Cruise as his Cruisiest, the film throws in my future ex-wife, Emily Blunt, who’s every bit Tom's equal as England’s most badass supersoldier.

Elsewhere, Edge of Tomorrow serves-up a unique premise, a smart script and engaging characters to enhance the usual sci-fi mayhem. It’s essentially Groundhog Day with aliens and Tom Cruise playing William Cage, an American Army public affairs officer - with no fighting experience - who repeatedly dies and relives the same battle over and over. He's able to change events each time because he has knowledge no one else does about the future.

Though smarter than your typical sci-fi action film - playing around with the concept of time just as engagingly as Interstellar - the film never really found an audience in theaters. Perhaps some of that was due to being slapped with a generic title that sounds like a romance novel. They should have stayed with the title of its source, All You Need is Kill, which is far more intriguing. Hell, simply calling it The One Where Tom Cruise Fights Aliens would have better clued audiences in for what to expect.

But Edge of Tomorrow eventually found its niche on home video. Highly re-watchable, the film was given a pretty decent Blu-ray release that included a bevy of bonus features. That disc is also included with this new 4K UHD release, which is a good thing because the overall picture quality of the Blu-ray is actually more consistent. Edge of Tomorrow was never a particularly “pretty” film to begin with and the 4K transfer doesn’t significantly change that. Some scenes look great, while others - such as an early scene in the Army barracks - almost look over-exposed. Both discs sound terrific though, with the 4K version sporting Dolby Atmos for those of you equipped for it.

Being one of the better sci-fi action films in recent years - as well as one of Tom Cruise’s best - Edge of Tomorrow is certainly worth owning. However, watching Cruise fight aliens in 4K isn't quite the upgrade one would hope. The transfer ain't bad, but it's inconsistent, so those who already own it on Blu-ray might be content with what they have.

FEATURETTES - “Operation Downfall: Adrenaline Cut”; “Storming the Beach”; “Weapons of the Future”; “Creatures Not of This World”; “On the Edge with Doug Liman”;