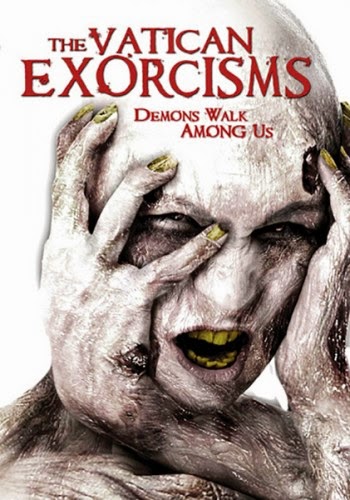 This mockumentary may be the nadir of both the demonic possession and found footage genres.

While horror fans have long-since accepted the reality that there will never be another Exorcist, we're always open to a nifty spin of the same concept (James Wan's The Conjuring was a ton of scary fun). And even though found footage is fast wearing out its welcome, there's still the occasional film which utilizes this budget-conscious style to great effect (such as Paranormal Activity and the woefully-underrated The Bay). But The Vatican Exorcisms doesn't even rise to the level of a decent rip-off. It's a clumsy, poorly-acted bore that repeatedly feels the need to remind us what we're seeing is real.

Joe Milano (looking like a scruffy Antonio Banderas) plays himself, a filmmaker who travels to Italy to investigate corruption and evil-doings inside the Vatican, which includes interviews with 'insiders' and secretly shooting a black mass ceremony while he repeatedly whispers stuff like "Oh my God, what's happening here?" What little plot remains is then gleefully tossed aside once we meet a Vatican exorcist who "deals with the Devil everyday." Boy, does he! It just be rainin' possessed people in Italy! The rest of the film has Milano following this priest from one exorcism to the next (with little or no transition), exterminating demons like the Orkin Man before moving on. Meanwhile, Joe himself becomes increasingly disturbed, sweaty and psychotic (though it's never explained why).

The exorcism sequences are long, repetitive and eventually unintentionally funny. The priest utters the exact same 'ominous' chant during each exorcism, which sounds like it was written by a guy who once knew a guy who watched a lot of movies inspired by The Exorcist. The climax is easily the most excruciating and hilarious. It goes on for nearly 15 minutes and consists of little more than a bug-eyed, wiry contortionist pretending to be possessed by writhing on a church floor while Joe gets crazier and sweatier.

Even at a scant 76 minutes (including end credits), The Vatican Exorcisms is a colossal, plotless bore. Despite numerous title cards desperately claiming its authenticity, at no point would even the most gullible viewer assume this was real. It makes one wish Mystery Science Theater 3000 was still around. They'd have a field day with this.