THE HAPPENING: A Passionate Plea to Mark Wahlberg 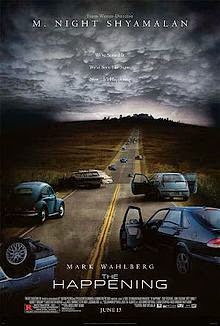 I know you’re a busy man, but I’m desperate and don’t know who else to turn to. My wife and I have been married a long time. Most of those years have been happy ones, but lately, she’s become increasingly depressed. So I am pleading for you to find some time in your schedule between Transformers movies to show up at our doorstep and put some spark back in our lives.

No, I’m not asking you to be a sexual surrogate (your services in that area would probably assure she’d never want to see me naked again), nor is my wife a big fan of your music and film career. You can leave the glossies and autograph pens at home because she won’t be bowled-over by your arrival…

…unless you do me a solid, one which might bring her out of her funk.

Before you roll your eyes and consider deleting this message, I’ll have you know I paid good box office cash to endure Planet of the Apes, Rock Star, Max Payne, Pain & Gain and The Lovely Bones. The way I see it, you kind-of owe me, so don’t make me come looking for you.

Now that I have your complete attention, it’s important to know a little about my wife. She’s a kind, lovely woman and a wonderful mother. She’s intelligent, well-read and quite funny. She’s also very ambitious; one of her long-time goals has been to cultivate an urban garden in order to grow a variety of fruits and vegetables. In fact, as I write this, she’s making me dig-up what’s left of the postage stamp we call a lawn. Armed with just a shovel, it’s been a bitch, but at least I won’t have to shell-out $300 bucks for a new lawnmower (our old one exploded last summer).

Yet no matter how much love and attention she's always given every plant she’s made me load into our SUV during trips to Home Depot, nearly all of them wither away and die within a few weeks. Even cactus, the indestructible Terminators of the plant kingdom, have almost no chance of survival in her hands. Worse-still was one anniversary when I came home with a dozen roses, all of which impaled themselves on their own thorns the second she laid eyes on them.

My wife still hasn’t figured out that she’s the arboreal equivalent of the Grim Reaper, yet this goddamn garden is really important to her. I’m currently in a constant state of fear because when something doesn’t go as planned, she tends to get so depressed that I feel the need to put the Suicide Hotline on my call list. Yeah, I’ve considered venturing to our local Safeway store to pick up various veggies to toss into the garden in hopes she’ll think this death curse has been lifted, but who am I kidding? I’ve never been able to lie to her.

This, Mr. Wahlberg, is where you come in. Remember The Happening, where you played a high school science teacher able to figure out the wave of mass suicides was due to an apocalyptic revolt by all the plants, trees and grass? Of course you do, because it was the greatest performance of your career. Who else could hold a serious conversation with a plastic plant without the audience bursting into laughter? Some might argue that you couldn’t either, but my wife and I believe everything we see on TV. So you, my friend (I feel like I can call you a friend at this point) have the unique opportunity to not only save our garden, but our marriage as well (I always have a lot more sex when my wife is happy).

All you have to do is stop by the house, stroll through the garden and use your thespian skills to talk these plants into flourishing. Be humble, cordial and nice, like you were when talking to that fake plant in The Happening. Apply the same congenial & friendly Wahlberg voice you often reserve for your ’serious’ movies and make it rain like dollars at a lap dance! You did it once, now I implore you to do it again. In return, I'll scoop all the dog shit from our yard, fire up the barbecue & grill some burgers (since you made it obvious in The Happening you don't like hot dogs). As a bonus, I’ll offer free advice why you should get your ass out of the Transformers franchise right now (before you’re in too deep). Maybe we could even talk sports, at which time I'll enlighten you on how much the rest of the world really hates the Boston Red Sox.

At any rate, if my wife’s garden still withers on the vine, at least I can blame you. But being a high profile celebrity, you’re used to that, right?
Posted by D.M. Anderson at 8:18 PM