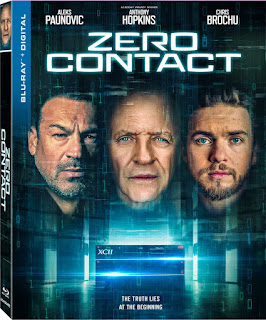 Zero Contact is another one of those “gimmick” movies. In fact, the title itself doesn’t refer to anything related to the plot, but the gimmick itself…sorta like The Blair Witch Project being released as Three Kids and a Camera.

The gimmick here is that the film is mostly presented as a Zoom-type meeting, with all of the principal actors performing from different locations around the world. This isn’t exactly uncharted territory, though. The underrated Unfriended franchise did it first (and better, if you ask me). According to promotional material, Zero Contact was produced at the height of the global pandemic, though that was nothing to do with the actual story, either.

But hey, they managed to nab the great Anthony Hopkins. While his role is more than a gratuitous five minute cameo tossed in to boost marquee value, at no point does he interact - virtually or otherwise - with any of the other actors. All of his scenes are shot in isolation, mostly as smartphone recordings. Considering I just recently watched a Facebook video Hopkins shared where he’s playing the piano for his cat - and is seen in the film tickling the ivories in a similar setting - I’m assuming he got to work at home. Good for him.

As for Hopkins’ character, Finley Hart is an eccentric computer genius who has developed a device that is capable of enabling teleportation, or maybe even time travel, or something like that. It’s never made quite clear what this thing can do, but after Hart’s death, five former professional and personal associates - including his estranged son, Sam (Chris Brochu) - are summoned to a virtual meeting. The A.I. informs them that each must enter a personal code within 60 minutes to activate the machine. Unfortunately, because it’s apparently powered by dark matter, there’s a possibility that turning it on will end the world. However, one of Finley’s recordings claims the world will end if they don’t turn it on.

Meanwhile, some of these people are being murdered during the meeting by a digitally-distorted figure who’s trying to stop them. As for Sam…despite being thousands of miles away, he is able to arrive at their homes in time to either save them or grab the computer codes. Again, it’s not adequately explained how this is possible, nor is it shown (I was assuming the machine hadn’t been fired up yet). In fact, most of the details about the machine’s function and the ominous implications of using it are conspicuously absent, though it's the driving force behind the narrative.

But as bewildering as it gets, Zero Contact is actually pretty enjoyable. We may not always know just what the hell is going on, but the film does a decent job establishing its characters and building tension. Something terrible is going down, even if we are unclear what it is, and perhaps that sense of dread is ultimately more important than plausible science. So while this inevitably leads to a disappointing destination, the journey itself is kind of fun.

No one will mistake Zero Contact for a great film, nor is it another gold star on Hopkins’ resume (he’s good, but mostly engages in stream-of-consciousness rambling). But as movies coasting on a singular gimmick go, I’ve seen far worse.

Thanks for the review! We watched a preview with the family over the holiday and it seemed somewhat interesting, although it gave me a little zoom-teacher ptsd, so we watched “The Ambulance” instead. (Which, if you are wondering is literally one 2hour and 17minute action scene.)