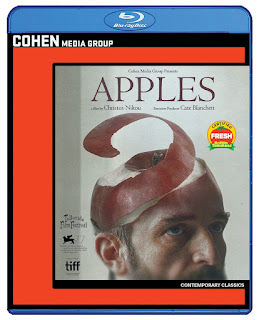 If nothing else, this sci-fi tinged Greek film serves up a concept I’ve never seen before. Not bad for writer-director Christos Nikou’s first feature film. What he does with the concept is pretty interesting, too, making Apples worth seeking out for those looking for something different.

Introverted loner Aris (Aris Servetalis) is suddenly stricken with total amnesia, which is a widespread pandemic that currently has no cure. Without ID, he’s taken to a facility where others have also been afflicted. Hopefully, relatives will come to claim them (provided they haven’t become afflicted, as well). Nobody comes for Aris, so he’s given two options…either remain at the facility indefinitely or take part in an experimental program that will help him begin a new life.

Choosing the latter, Aris is set-up in a small apartment. He’s required to go out each day and engage in a specific activity chosen by his doctors. Sometimes it's simply seeing a movie or riding a bike, other times he’s required to interact with strangers, such as getting a lap dance from a stripper. For each task, Aris must take a Poloroid photo and put it in a scrapbook, which serves as a journal of his activities. Then he meets Anna (Sofia Georgovassili), a fellow amnesiac who’s going through the same program. She often asks his help for some of her own activities, and he’s usually happy to accommodate her.

At this point, Apples takes some interesting narrative turns, though it raises more questions than it chooses to answer (directly, anyway). However, they’re really good questions. What is the purpose of these tasks? Are they meaningful without any previous life-experience to provide context? Is the program actually helping these two adapt to a new life? We suspect it isn’t helping Anna at all. She accomplishes each task like a mere checklist without becoming personally invested in any of them, including her one-time sexual encounter with Aris. Conversely, Aris lets his emotional guard down at key moments, usually when he’s alone, and becomes greatly affected when required to find someone who’s terminally ill and comfort them until they die.

Is that what it takes for an amnesiac to reconnect with the world? The poignant conclusion certainly suggests so. Still, this isn’t a somber journey. Aside from his love of apples, we know almost nothing about Aris, but he’s likable - or at least sympathetic - and his experiences are often amusing. Despite her emotional indifference, we’re sort of invested in Anna, too, which makes the abrupt denouement a little frustrating. There’s closure, but Apples expects the viewer to work for it and those willing to put in the effort might find the film rewarding.