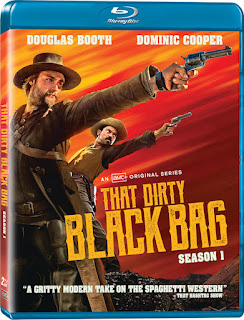 The bag of the title is lugged around by ruthless bounty hunter Red Bill (Douglas Booth) and it’s where he keeps the heads of the outlaws he kills. As he states more than once throughout the show, “A head weighs less than a body.”  And away we go…

Believe it or not, Red Bill is arguably the hero of the story. Everyone else is morally questionable at best. At worst, some commit various acts of greed, revenge, robbery and murder - even a little cannibalism -  making Red Bill look like Gene Autry. This ensemble of characters is the driving force behind That Dirty Black Bag, a delirious and violent throwback to spaghetti westerns, a subgenre never renowned for its restraint to begin with.

Greenvale is a bad town. Once the center of a gold rush, it has since fallen into decay, ravaged by drought, corruption and greed. It’s full of bad people, too, like Thompson (Paterson Joseph), a ruthless magnate who’s convinced the motherlode has yet to be found and has been forcing most of the locals to sell their land. The lone exception is Steve (Christian Cooke), a struggling farmer & family man who claims God himself told him the rains would return to re-nourish the parched land. But Steve’s no saint, either, still carrying a torch for his old flame, Eve (Niv Sultan), who now runs the town brothel. Greenvale is ruled by an iron fist by Sheriff Arthur McCoy (Dominic Cooper). He was once an outlaw himself, committing numerous robberies with his psychotic brother, Bronson (Guido Caprino). And McCoy's got no love for bounty hunters like Bill riding into town.

While juggling numerous subplots, the primary narrative of That Little Black Bag focuses on Bill, McCoy and Bronson, whose pasts have them irrevocably linked, though they don’t realize it right away. It turns out Bill is no mere bounty hunter. For years, he’s been searching for the man who brutally murdered his mother when he was a boy. Normally, I don’t care for shows dedicating an entire episode to flashbacks, but in the case of these three men, Episode Four ends up being the crux of the entire story. McCoy’s secrets are shocking, while Bill’s are tragic, and this particular episode establishes both as neither completely good nor evil. Conversely, Bronson is an irredeemable, sadistic bastard. Not-only is he still a vicious criminal, the zealous, child-sacrificing cult he belongs to is presently grooming him to run for state governor.

Throughout its eight episodes, That Dirty Black Bag is filled with conflict, betrayal, plot surprises - including a serial killer! - and a shit-ton of gory violence. This no holds barred approach to both the imagery and the narrative is a hell of a lot of fun. It doesn’t quite achieve the aesthetic artistry of Sergio Leone, but excellent cinematography and ambitious production design give these episodes the feel of a theatrical film (a far cry from a lot of the budget-conscious direct-to-video westerns I’ve been tasked to review lately). And for the most part, the performances are excellent (Cooper, in particular, looks like he’s having a great time).

But…just don’t expect much in the way of closure. A few concurrent storylines are satisfactorily resolved during the season and the writers are certainly unopposed to killing-off major characters…sometimes without warning. However, the main story arc is unresolved by the end of episode eight and, as of this writing, a second season has not yet been confirmed. So despite a slam-bang climax, there’s a chance we’ll never see how everything pans out. That would be a shame because, so far, That Dirty Black Bag is a lively, uninhibited homage to classic spaghetti westerns.