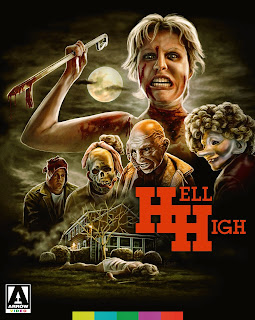 In a new interview included on this disc, actor Christopher Cousins (who plays Jon-Jon) says that he first thought Hell High was supposed to be a satire. After watching the film, one can see why. On paper, this must have been hilarious, featuring a script loaded with ridiculous dialogue and characters waaay too broadly drawn to be taken seriously.

While Hell High is indeed hilarious, the humor is entirely unintentional. Despite some laughably gratuitous T&A and one of the worst comic relief characters in horror history, it’s clear from the get-go that writer-director Robert Grossman’s intentions are serious.

Obstinately marketed to capitalize on the 80s slasher trend - which was already waning by the time this movie ever saw the light of day - Hell High is more thematically similar to such revenge-minded flicks as I Spit on Your Grave and Class of 1984. In this case, we have meek, angst-ridden high school teacher Brooke Storm (Maureen Mooney) being tormented by a click of students led by a narcissistic douche named Dickens (Chrisopher Stryker). They assault Brooke at her home, which includes a truly WTF scene that shows a female character schooling Dickens on how to “gently” rape a woman.

After Brooke leaps out her bedroom window, the kids assume she’s dead, then decide to try and frame the football team quarterback - referred to as “the quarterback” throughout the film - for the crime. While Dickens sends Jon-Jon out to find something to plant as evidence, they hang-out at Brooke’s house to await his return. Meanwhile, it turns out Brooke was only mostly-dead. Despite falling two stories, she rebounds unscathed - possessing the strength of 10 men - to exact revenge.

We actually spend a lot more time with the kids than their victim. Not only are they uninteresting and unlikable, none of them look, speak or behave like any teenager you’ve ever met. With the exception of perpetually contemptuous Dickens, their personalities often change at the drop of a hat, depending on what a particular scene dictates. One minute Jon-Jon’s seems to be the gang’s moral compass, warning Dickens they're taking things too far, the next he’s happily participating in the assault, then lamenting the threat to his college future after Brooke appears to be dead. And believe it or not, I think we’re expected to sympathize with him, even after causing a fiery crash involving the guy he’s trying to frame for murder.

From a technical standpoint, Hell High is actually well made for a low budget film, and overall, the performances are pretty good. However, the characters and situations are so ineptly conceived and stupidly written that the results are jaw-dropping. Because of this, there’s a trainwreck quality to the entire film that’s morbidly fascinating. A lot of hard work went into this and Grossman’s sincerity is admirable, but he’s comedically clueless about pacing, tone and basic human behavior (maybe he should have spent more time hanging-out with actual teenagers before writing about them).

While most of the fun comes at its own expense, at least Hell High ain’t boring, which is ultimately the worst sin a horror film can commit. There are also a few nifty kills that should tickle the yahoo crowd (one character’s ironic death from a #2 pencil is our personal favorite). As usual, Arrow Video puts together a better Blu-ray package than movies like this would get elsewhere. In addition to a great transfer, the disc includes a bunch of interviews with various cast & crew, as well as three audio commentaries (including one by none other than Joe Bob Briggs). The movie may be bad, but the anecdotes behind it are fascinating.

“BACK TO SCHOOLS: THE LOCATIONS OF HELL HIGH” - A video tour of the locations, then and now.

AUDIO COMMENTARIES - 1) By director-producer-co-writer Robert Grossman and cinematographer Steven Fierberg; 2) Archival commentary by Grossman; 3) By Joe Bob Briggs (which is obviously the most entertaining one).

SUPPLEMENTAL BOOKLET - Includes an interview with stunt coordinator Webster Whinery (who’s probably the only guy involved in the film who went on to bigger and better things); cast, crew & restoration credits.