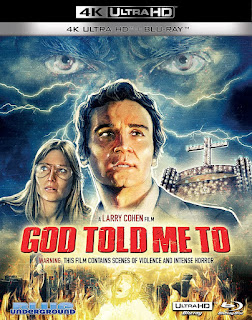 The late (sometimes great) Larry Cohen was a national treasure, even if his eccentricities and quasi-guerrilla approach to filmmaking was never fully embraced by the mainstream. Since the mid-90s, he worked mostly as a screenwriter before passing away in 2019, but during his prolific heyday, Cohen directed some of horror's most endearingly tacky, slyly subversive films…usually by the seat of his pants. I challenge anyone to watch the likes of It’s Alive, Q - The Winged Serpent or The Stuff without shit-eating grin on their face.

1976’s God Told Me To is one of his lesser known films, but it, too, has something of a cult following. It’s also pretty bleak for Cohen, especially the first half, depicting a series of random mass killings throughout New York City. Though committed by different people, each claims the same reason for their spree: “God told me to.” The film may be a product of its era, but considering our current climate, these scenes seem disturbingly timely.

Tony Lo Bianco plays Peter Nicholas, a troubled cop connecting the killings, which gets him into hot water at work when he goes public, causing city wide panic. For a while, the narrative unfolds more like a police procedural than a horror film, at least until we’re thrown some truly WTF narrative curveballs. For the sake of those who’ve never seen this, I’ll refrain from elaborating, but let’s just say you haven’t lived until you’ve witnessed an androgynous Richard Lynch (of all people) showing off a pulsating vagina growing from his torso.

Elsewhere, God Told Me To is pure Larry Cohen, a typically slapdash hodgepodge of weird ideas, budget-conscious action, haphazard editing and occasional tastelessness. Like his best-known films, we’re convinced he’s largely making it up as he goes along. At the same time, he’s always been a good writer with a knack for assembling better casts than movies such as this usually have (or deserve). And just as he did with Q - The Winged Serpent, Cohen makes great use of various New York locations. I suppose one could consider him the Woody Allen of exploitation films.

While God Told Me To is essential viewing for Cohen fans, his films are definitely an acquired taste and this is no exception. It’s the work of a man who’s always been armed with more audacity than resources and those who can’t appreciate that will probably hate it. For everyone else, this 4K upgrade from Blue Underground nicely preserves the film’s grimy aesthetic, though it’s not a massive improvement over the Blu-ray version. However, this one offers more audio options, including a Dolby Atmos track. Aside from a new audio commentary, the bonus features are mostly carried over from previous releases, but they’re a lot of fun, especially Cohen’s own commentary and Q&A sessions.

“GOD TOLD ME TO BONE” - A great 20 minute Q&A with Larry Cohen after the screenings of two films at the New Beverly Cinema.

LINCOLN CENTER Q&A - From 2002, following a screening of God Told Me To.

TRAILERS & TV SPOTS - Features trailers for God Told Me To, as well as its alternate title, Demon.