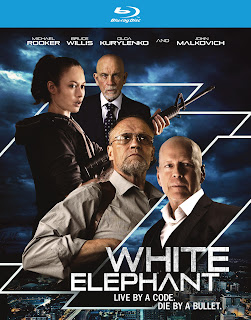 In this job, I’ve reviewed a plethora of low-end, direct-to-video action films starring former box office titans now past their prime. More often than not, these things end up being 90 minutes of my life I’ll never get back. While White Elephant does indeed feature one of those guys, the actual star is Michael Rooker, the beloved character actor (in our house, anyway) who's always been in his prime.

He has a long, impressive resume, but most of his roles have been antagonists, secondary characters or sidekicks. Since he has certainly stolen a few movies from bigger names in the cast…why not let him carry a smaller film on his shoulders and let him be king of the mountain for a change?

Rooker's the main reason White Elephant is worth checking out. He plays Gabriel Tancredi, an aging mob hitman still mourning the death of his wife while doing various dirty jobs for boss Arnold Soloman (Bruce Willis), with the help of ambitious, cocky protege Carlos (Vadhir Derbez). However, when ordered to kill hard-nosed cop Vanessa Flynn (Olga Kurylenko), Gabriel has a sudden change of heart and decides to save her. The film doesn’t adequately explain why - threatening to delve into Batman v. Superman’s “Martha!” territory - but ultimately, the reason doesn't matter. Rooker’s earnestness and conviction sells the character’s sudden epiphany, while still being quite the badass.

The familiar plot relies too much on the stupidity and shitty marksmanship of the bad guys, all of whom are one-note caricatures, which includes Willis in yet-another performance that’s painful to watch in light of his recent aphasia diagnosis. Conversely, Kurylenko fares better in a physically demanding role, but only Rooker provides his character with the depth and gravitas necessary for us to invest in him. Elsewhere, there’s enough gunplay to keep things interesting, culminating in a big, loud, insanely-bloody showdown at Gabriel’s mansion (where he keeps enough weapons to take down a small country). White Elephant never challenges the intellect, nor is it teaming with originality, but Michael Rooker makes the most of a rare leading role. He elevates the film a notch or two higher than the usual direct-to-video drivel.