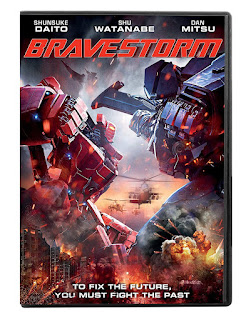 Uninformed Yankee younguns ready to declare “Transformers rip-off” should be made-aware that giant robots have been stomping through Tokyo since the 1930s. Sure, Bravestorm partially owes its existence to a few recent rock ‘em sock ‘em blockbusters, but the film is actually a remake of two Japanese television shows from the 1970s. So let’s cut it a little slack, shall we?

That being said, Bravestorm is still pretty derivative, with a murky story that more-or-less riffs The Terminator. In 2050, Tokyo is a toxic wasteland, most of the population killed by a gassy mechanical monster called Black Baron, which poisoned the atmosphere to make it habitable for alien invaders known as the Killgis. A few surviving siblings travel back in time to 2018 and enlist their scientist grandfather to built their own robot – the Red Baron – hoping to defeat Black Baron and save the future. However, Gramps insists his delinquent younger brother – who participates in underground fight clubs – should drive the thing.

The characters are bland and some of the dialogue is supremely silly, the latter exacerbated by the English dub (the Japanese language option has no subtitles). And considering the age group which typically goes for this type of thing, Bravestorm has enough f-bombs to definitely earn it an R-rating. But I doubt anyone will care about that once robot fightin’ time finally arrives. The showdown in downtown Tokyo might be underwhelming compared to, say, Pacific Rim or Michael Bay’s brand of mechanical mayhem, but there’s some impressive destruction and the CGI is decent for the budget. I must confess, however, that I was kinda hoping for old school in-camera effects...like in those Japanese sci-fi films that amused me as a kid.

The film concludes with the optimistic coda, “to be continued,” but as of this writing, no sequel appears to be coming down the pipeline. And if that never happens, well, this ain’t exactly the MCU. While Bravestorm leaves a couple of loose threads that probably don’t require tying, it offers enough goofy, energetic fun to stand on its own.