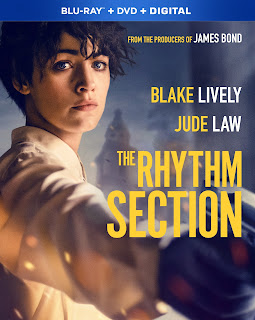 Though it will never be mistaken for a great film, there are two things that make The Rhythm Section worth checking out.

First, it features a believable protagonist. Since losing her entire family in a plane crash, Stephanie Patrick (Blake Lively) has descended into prostitution and drug addiction. Then she meets a reporter who claims the plane crash was a terrorist attack and has evidence provided by ex-MI-6 operative Iain Boyd (Jude Law). After the reporter is murdered, she takes his research and seeks Boyd’s help in avenging her family. He reluctantly agrees to train her to strike back at the organization responsible.

But Stephanie doesn’t morph into a fearless, indestructible supersoldier. Throughout the entire film, she is clearly in over her head and screws up a lot, sometimes making things worse. Dumb luck saves her more often than any acquired skills, which makes some of the action sequences feel a bit more down-to-earth than those in similar films.

Second, Blake Lively goes all-in with a dedicated performance. She effectively displays the hopelessness, nihilism, anger and wrath required for Stephanie to be convincing. Considering her statuesque beauty, I suspect the temptation to turn her into another Atomic Blonde was strong, but aside from a brief – and pointless – scene where she poses as a high-end call girl, Lively looks suitably strung-out, weary and beaten down by life.

She’s the only interesting character in a film that loses focus about half-way through, when it strays from being a straight revenge thriller and throws in unnecessary plot turns, even briefly turning Stephanie into a killer-for-hire. Once she starts trotting the globe like some kind of grunge-era assassin, the story grows increasingly convoluted, to say nothing of implausible.

Narrative quibbles aside, The Rhythm Section may be unremarkable, but it’s certainly watchable on a dull evening (which we all have plenty of, right now). Blake Lively makes her character compelling enough to keep things interesting during the duller stretches, while director Reed Morano strings together a few nifty action scenes.