THE VINYL REVIVAL is a Love Song 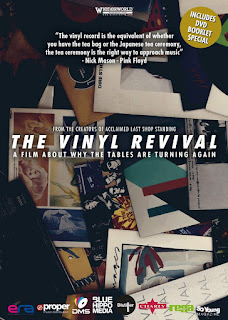 I’m too old to be a hipster, so I guess I’m one of those old farts who still prefers vinyl to any other format. As a kid, biking to the local record store was the best way to blow some of my lawnmowing income, so it’s unexpectedly awesome that I’m once-again able to grab me a slab o’ wax each payday. Of course I’m glad records are making a comeback.

The Vinyl Revival is sort of a love song to the independent record stores that support the format, from the shops that weathered the lean years to those which have popped up since. I hesitate to call it a documentary in the purest sense. Running a scant 43 minutes, the film isn’t particularly informational and doesn’t delve much into the hows or whys.

Instead, it’s a series of affectionate testimonials by shop owners and some notable artists, who explain their love for vinyl over other formats, as well as their opinions why it’s being embraced by significant numbers of young music buyers (though we don’t actually hear from any of them). In other words, The Vinyl Revival mostly preaches to the converted.

And that’s okay, because their enthusiasm is infectious. It’s also sort-of reassuring that vinyl doesn’t appear to be just a nostalgic fad (at least in England, where this is shot). Short but sweet, the film is a charming look at the tiny shops that have found their niche.