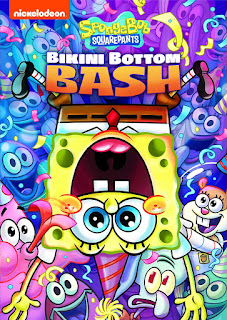 FREE KITTENS MOVIE GUIDE is giving away a DVD copy of SPONGEBOB SQUAREPANTS: BIKINI BOTTOM BASH, courtesy of PARAMOUNT.
Available on DVD 4/28
This rockin’ compilation boasts five uproarious party-themed episodes, including SpongeBob’s Big Birthday Blowout, which ranked as the #1 show for the year across kid networks among K2-11, K6-11, K9-14 and K12-17.  It’s SpongeBob’s birthday, but it’s a surprise, so SpongeBob and Patrick are going on a tour of the surface world while everyone else plans the birthday blowout below. Then, Bikini Bottom throws a wave of other parties: Catch some rays with SpongeBob and Patrick to get into the biggest bash in town, enjoy a girls’ night in at Pearl’s sleepover, raise the pineapple’s roof at SpongeBob’s house party, and celebrate the Krusty Krab’s momentous eleventy-seventh anniversary! Let’s par-tay! The mixed live-action and animation special features the celebrated voice cast behind SpongeBob, Patrick, Mr. Krabs, Sandy, Squidward and Plankton playing human versions of their animated characters and guest star David Hasselhoff (Baywatch). Additional guest stars in the special include Kel Mitchell (All That), Jack Griffo (The Thundermans) and Daniella Perkins (Knight Squad).

TO ENTER: Simply drop us a message at freekittensmovieguide@gmail.com.
CONTEST ENDS 5/5.
Posted by D.M. Anderson at 12:44 PM