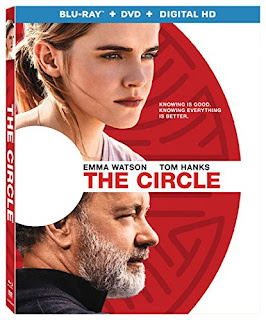 The ramifications of social media insinuating itself in every aspect of our lives is an ideal - and chilling - concept for a timely thriller. But while it's certainly entertaining, The Circle only explores them on a superficial level.

The Circle is a social media network that's like Facebook on crack. Charismatic CEO Eamon Bailey (Tom Hanks) envisions a future with no secrets, and everyone can instantly know everything about anyone else. He plans to accomplish this with SeeChange, a revolutionary data-collecting camera that can literally be placed anywhere. Mae Holland (Emma Watson) is new to the company and initially apprehensive over The Circle's intrusion on her own life. But since they also take complete care of her, as well as her MS-stricken father (Bill Paxton, in his final role), she's soon all-in, eventually agreeing to becoming the poster child for the company and spearheading their efforts to make create a world with absolutely no secrets...or privacy (the argument being that people will all behave if they know they're always being watched).

This concept isn't exactly new to movies, but given the current proliferation of social media (essentially rendering all of us Big Brother), the opportunity for dark satire and social commentary is obvious. The Circle begins brilliantly, depicting the company's thousands of eager young employees as mindless sheep - almost like Stepford Children - whose intrusive behavior isn't too far removed from what you'd see in a cult. Hanks hits all the right notes as Bailey: equal parts salesman, motivational speaker and preacher, with an outward congeniality that masks a more sinister agenda.

However, the film becomes less effective once the focus shifts from the dynamics of The Circle and its disciples to an obvious, heavy-handed message that invading one's privacy is morally wrong. We don't really need another film to tell us this, but The Circle treats the idea as though it were a revelation. Additionally, while Watson is decent in the lead role, Mae's motives and personality often change with little provocation, depending on what the story requires. By the final act, she's become more of a plot device than a character we're invested in.

Though ambitious in both scope and message, The Circle doesn't really live up to its potential or give the viewer anything new to think about. Had it maintained the amusingly sinister tone established at the get-go, this could have been something special. Still, The Circle is okay for what it is: a slickly made, enjoyable film, as easy to consume as movie popcorn and just as memorable.