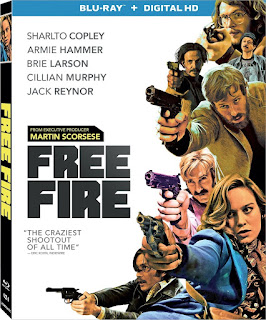 One thing is certain...the cast of Free Fire are clearly having a good time.

What actor wouldn't want to get decked-out in 70's era garb, act super-cool, grab some guns and start blasting away at each other? Kind of like playing cops & robbers, only this time there isn't a single badge to be seen. Everyone's clearly all-in for this action-comedy. Whether or not the audience has as much fun is certainly subjective.

Aside from a brief and simple set-up - an illegal weapons sale gone awry - the entire film is one prolonged gunfight, bad guys vs. bad guys, in an abandoned factory. There are no actual story complications such as a betrayal or double-cross. They simply piss each other off enough to start shooting...and shooting...and shooting.

Much of the "humor" stems from the fight itself, that these characters are almost nonchalant about killing each other while fighting for their own lives. Everyone gets shot multiple times, yet no one backs down, continuing to taunt each other during the entire gunfight. Half-way through the film, some are dead and most of those who aren't are barely able to stand, much less run. A few amusingly ponder how much time they've got left before they lose too much blood to kill everyone and get out of there alive.

The absurd scenario is mostly played for laughs, and sometimes it's pretty funny. There's also some amusing dialogue interspersed among the non-stop gunplay. Even the violence - which grows increasingly brutal - elicits a few chuckles now and then. However, like many black comedies which attempt to mine laughs from a dark premise, a little of this goes a long way. Scenes of bullet-riddled characters hobbling and crawling everywhere become a little repetitive after awhile.

Most of the cast is good and a few of the characters are kind of interesting. Armie Hammer is fun as Ord. a sharp-dressed, smooth talking mediator. However, while Sharlto Copley is a good actor, the whiny, oddball persona he often incorporates in roles is growing tiresome. Aside from the polyester suit, there's little difference between his character in Free Fire and those he played in District 9 and Elysium.

But even if Free Fire isn't as much outrageous fun as the premise suggests, it's sometimes amusing and the violent action is well executed. The film runs out of gas toward the end, but it's interesting enough to check out at least once.