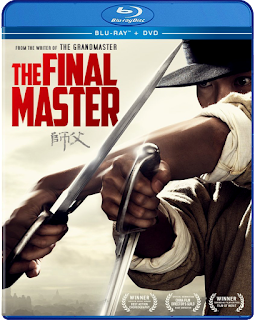 It's a damn good thing the action and performances in The Final Master are good, because the story is as confounding as any I've seen in recent memory.

Liao Fan is Chen, the last remaining master of the martial art known as Wing Chun. He wants to open a school in the city of Tianjin in order to pass his skills along. But it's not as simple as that. Tradition dictates that he must first challenge and defeat the other 8 schools (which later turns into 19). But it ain't that simple either. Since he's not from Tianjin, he's not allowed to fight himself; he must select and train someone from town. But that's also too simple. He takes a wife, Zhao (Song Jia), and poses as a local peasant to find a suitable apprentice, almost immediately deciding on Geng. Then he spends a few years training the young man to prepare for the challenge.

But, alas, more complications present themselves, mostly from masters of other houses who make it damn near impossible for Chen to achieve his dream. Much of this plot becomes so confusing that I more-or-less gave up trying to keep track of who is screwing over who and why. But in a nutshell, victory for Chen & Geng pretty much becomes a damned-if-you-do-damned-if-you-don't scenario.

The behaviors and actions of most secondary characters are almost maddeningly ambiguous, and even when they explain themselves, it's difficult to understand why everyone is going to all this trouble just to keep another martial arts school from opening. Fortunately, The Final Master has enough fighting and action to compensate for its convoluted tale, enhanced by terrific fight scenes, great editing and what might be the most oddball music score I've ever heard (though it fits perfectly).

As Master Chen, Fan has a lot of interesting and dangerous toys at his disposal, including a staff adorned with several long, machete-like blades. The climax, which has Chen fighting dozens of foes as he makes his way down a narrow alley, is wildly choreographed and very exciting (though the outcome is never really in doubt).

So forget the plot - you probably will anyway - sit back and enjoy the action, all of which looks like it was done without any tethers or wires. The Final Master is visually impressive enough to please martial arts fans.