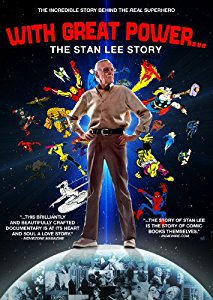 Stan Lee is one of those public figures who transcends his medium. Like The Beatles, Michael Jordan & Bill Gates, just about everybody knows who he is, even if they aren't particularly interested in what he does. People like that are always fun to learn more about.

As the man behind Marvel Comics - and its evolution into a global entertainment superpower - Stan Lee has an interesting story indeed. With Great Power does a fairly decent job telling that story, though it's often more of an affectionate tribute to the man than an in-depth biography. Ergo, fans who worship at his alter should love it.

Lee himself discusses his life and career, from his early days when he was hired as a gofer working for Timely Comics, his rise as the head of Marvel - co-creating some of the genre's most iconic heroes - to the present, where he's treated as a rock star by both fans and peers. Interspersed throughout are interviews with various former colleagues and family members, as well as producers, actors & directors who've been involved in movies which made Marvel a Hollywood powerhouse.

Everyone has nothing but gushing praise for the man, while Lee himself comes across as congenial and humble, always quick to point out that he didn't do it alone, extensively discussing the late Jack Kirby, the artist Lee co-created most of these characters with. Kirby's probably just as deserving of a tribute doc like this, though casual viewers probably don't even know who he was. As someone who's never really been into comics, I always assumed Lee was the artist and writer.

With Great Power is entertaining, though perhaps not comprehensive. A career almost eight decades long is tough to sum up in 80 minutes, meaning what we mostly get are the highlights (punctuated by a career setback or two). I also imagine hardcore comic buffs & collectors may already know much of Lee's story. Still, the film is pretty fun and I can't imagine his fans not getting a kick out of it.

This film was previously released on DVD in 2012. As far as I've been able to ascertain, this re-release is identical, including the bonus features.

EXTRA KIBBLES
FEATURETTES - Dozens of short segments related to Lee, comics and/or superheroes (public appearances, more interviews, etc). I'd list them all but I'd be up all night.
EXTENDED INTERVIEWS - Additional footage of over 40 actors, directors, colleagues & peers interviewed in the film.
CHARACTER GALLERY - A lengthy list of over 500 characters Stan Lee was involved with creating.
AUDIO COMMENTARY
KITTY CONSENSUS: