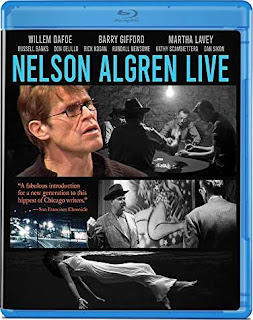 Confession time, folks. Prior to viewing this disc, I couldn’t have told you who Nelson Algren was. And it was only when reading the back-cover synopsis that I learned he wrote the novel, The Man with the Golden Arm, which was the basis for the classic Frank Sinatra movie (and Algren apparently hated).

But I’m not alone in my ignorance. Based on the voiceover during the opening credits, most of Algren's other work never achieved any real mainstream popularity and has-since faded into obscurity, never rediscovered by younger readers. Nelson Algren Live attempts to remedy that, though the nature of the man’s work probably precludes expanding his fan base.

Filmed live in 2009, several actors and writers gather to read excerpts of Algren’s writing, mostly short stories featuring down-and-out, morally questionable characters. Though Willem Dafoe is the most prominent name, he’s just part of the ensemble, all of whom take turns assuming the roles of the author’s characters while they read.  These segments are loosely connected by narration and ‘interviews’ with Algren (Barry Gifford, quoting Algren’s himself).

It goes without saying that live readings might be enjoyable to attend in-person, but aren’t necessarily a dynamic viewing experience. So one’s enjoyment of this film will depend largely on an existing appreciation for Algren’s work. If that applies to you, you’ll definitely want to check this out, especially since it climaxes with the reading of a previously unpublished story.

Based on the prose presented here, Algren’s work is an acquired taste (if Jack Kerouac had ever bothered to proofread, it might sound something like this). For the most part, Nelson Algren Live preaches to the converted, meaning fans will certainly get a kick out of the sincerity of the performances.

TRAILER - Which is pretty-much identical to the film’s opening title sequence.