FOUR GAMES IN FALL and the Real Phantom Menace 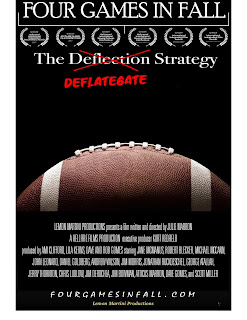 Other than movies, my favorite pastime is watching NFL football. And like a lot of self-respecting fans, I have a special dislike for the New England Patriots. In fact, the only time I ever root for them is when they’re playing the Dallas Cowboys. As a longtime Atlanta Falcons fan, that hatred was exacerbated when the Pats engineered the comeback of the century against them in Super Bowl LI. What made that game especially infuriating was that this was the Patriots’ first Super Bowl victory after ‘Deflategate’ branded them - and especially Tom Brady - as cheaters.

Of course they were cheaters! Ask anyone outside of Boston’s area code and they’d confirm the same thing. Even NFL commissioner Roger Goodell fined the team a million bucks, took away a few draft picks and suspended Brady four games. Served ‘em right.

Four Games in Fall is an eye-opening documentary that explores the science - and no small amount of spin doctoring - surrounding Deflategate, which alleged the Patriots had an unfair advantage by using under-inflated game balls. And I hate to say this, but after watching the film, I’ve come to the conclusion that the only thing the Patriots were guilty of that year was being a good team.

The film interviews dozens of journalists, lawyers and scientists, most of whom provide ample evidence that Deflategate was a manufactured scandal. We’re shown how cold weather affects a ball’s air pressure, especially if they were originally inflated indoors. These segments are pretty dry, like being subjected to a classroom lecture. However, the real meat of the story consists of speculation over the NFL’s motives for making Tom Brady a scapegoat, such as distracting media attention away from the league’s other recent controversies (like concussion lawsuits and Goodell’s mishandling of Ray Rice’s domestic violence incident).

Some viewers might initially think the film is treating Deflategate as some kind of national crisis. After all, it’s just a game. However, what’s truly scary is the “science for hire” aspect of the story. Here, the NFL hired various so-called scientific institutes to confirm their own findings regarding the game balls, the same groups who whipped-up evidence for tobacco companies showing nicotine to be non-addictive. Whether or not one gives a damn about football, the fact that such mega-corporations have that kind of power and influence is disconcerting.

Most of us Hatriots were certain Coach Belichick was the NFL’s Emperor Palpatine with Tom Brady as his Darth Vader. However, Four Games in Fall objectively suggests otherwise, providing a compelling argument that Roger Goodell is the real phantom menace. Too bad, really, because I still dislike the Patriots and Brady himself remains perfectly punchable. It sucks to accept the fact that all those goddamn winning seasons were probably legitimate.
KITTY CONSENSUS: