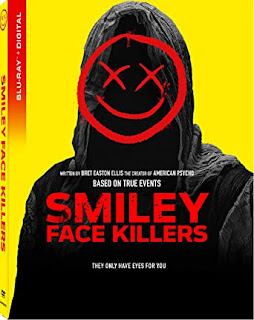 The film touts to be “inspired by true events,” which should be taken with a grain of salt.

It’s true that dozens of young men had been found in the water across the Midwest over the course of a decade, supposedly drowned. Since smiley face graffiti was found near some of the bodies, a few folks suggested all the deaths might be the work of a gang of serial killers. While the theory has largely been debunked, it’s still a pretty nifty idea for a movie, even if none of the “events” in Smiley Face Killers ever really happened.

In fact, the only part of the film that appears to be related to those unsolved cases is the main character, Jake (Ronen Rubinstein), who is young, good-looking and athletic, like many of the bodies that washed ashore. The rest is the work of screenwriter Bret Easton Ellis, the guy who unleashed American Psycho on the world (the novel, not the film), and director Tim Hunter, responsible for River’s Edge, one of the bleaker teen films of the ‘80s. You’d think this meeting of unsound minds would result in something darkly funny or revealing. Instead, Smiley Face Killers pretty much a straight horror film, and for the most part, a drab & depressing one.

The premise has Jake being stalked by a hooded figure (an unrecognizable Crispin Glover), who hacks his phone and breaks into his apartment to leave ominous signs of impending doom. Since Jake has psychological issues but refuses to take his medication - to the chagrin of his friends - the smart narrative move would have been to keep the viewer wondering if it’s all in his mind. However, it’s made almost immediately clear the hooded figure is real, which sort-of defeats the purpose of making Jake so mental in the first place (especially since he's unaware he's being hunted until it's too late).

Even that would be fine if the story actually moved, but after numerous false starts, it’s nearly an hour before anything truly exciting happens, with a brutal, gory final act that reveals who’s stalking Jake and why. But in the interim, we spend way too much time watching dull characters party, bicker and worry about Jake, who’s not particularly likable to begin with. Hunter certainly appears infatuated with him, though, never passing on an opportunity to show Jake in the buff (including the entire climax).

The real-life smiley face murders never made it past the theory stage, meaning the entire movie is fabricated, which ain’t necessarily a deal-breaker. After all, Tobe Hooper pulled the same stunt with The Texas Chainsaw Massacre. The difference is Hooper knew the genre inside and out, while Ellis and Hunter confuse horror with dull nihilism. Ultimately, Smiley Face Killers is likely to leave the viewer more bummed-out than horrified.