Ring in the holiday season and get ready to laugh-out-loud with an all-out prank  battle the whole family can enjoy, in the hilarious comedy, THE WAR WITH GRANDPA, now available to own for the first time on Digital on December 15, 2020 and on Blu-ray™, DVD and On Demand on December 22, 2020 from Universal Pictures Home Entertainment. Based on Robert Kimmel Smith’s multi-award-winning beloved children’s book of the same name, the film follows a series of escalating shenanigans that ensue when a grandfather (Academy Award® winner Robert De Niro, The Irishman, Meet the Parents franchise) moves in with his daughter, forcing his grandson (Oakes Fegley, The Goldfinch, This Is Where I Leave You) to begrudgingly give up his bedroom. Packed with heart and hysterical hijinks from start to finish, THE WAR WITH GRANDPA is the perfect “family-friendly comedy” (Pete Hammond, Deadline) everyone can enjoy during the holiday and beyond. 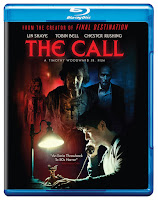 THE CALL releases on Blu-ray & DVD December 15
Set in the fall of 1987, a group of small-town friends must survive the night in the home of a sinister couple after a tragic accident occurs. Needing only to make a single phone call, the request seems horribly ordinary until they realize that this call could change their life…or end it. Led by horror icons Lin Shaye (Insidious franchise, Ouija) and Tobin Bell (Saw, Jigsaw), THE CALL has been a hit with both audiences and critics alike with The Digital Journal saying, “Tobin Bell is a revelation” and “Lin Shaye is irresistible.” Strong word of mouth helped THE CALL become one of the top preforming horror films of the season and the buzz is sure to continue when it releases this December on Blu-ray and DVD. Special features on both formats include deleted scenes, as well as a behind-the-scenes featurette that takes audiences into the minds of cast and crew and venture deeper into their nightmarish world. 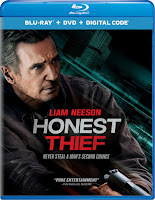 HONEST THIEF on Blu-ray & DVD 12/29
They call him the In and Out Bandit because meticulous thief Tom Carter (Liam Neeson) has stolen $9 million from small-town banks while managing to keep his identity a secret. But after he falls in love with the bubbly Annie (Kate Walsh), Tom decides to make a fresh start by coming clean about his criminal past, only to be double-crossed by two ruthless FBI agents. From the co-creator of Emmy-nominated series Ozark, thriller Honest Thief showcases Liam Neeson in a heartfelt tale of redemption, packed with fights, chases and explosions centered on one man's mission to make things right for the sake of love. Honest Thief is written and directed by Mark Williams and stars Liam Neeson (Taken), Kate Walsh (Grey's Anatomy), Jeffrey Donovan (Burn Notice), Jai Courtney (Suicide Squad), and Anthony Ramos (Hamilton). The ensemble cast includes Robert Patrick (Terminator 2: Judgment Day) and Jasmine Cephas Jones (Blindspotting). A Briarcliff Entertainment/Open Road production. 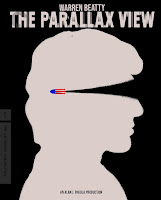 THE PARALLAX VIEW on Blu-ray from Criterion 2/9/21
In the second installment of Alan J. Pakula’s celebrated Paranoia Trilogy, he offers a chilling vision of America in the wake of the assassinations of the Kennedys and Martin Luther King Jr. and about to be shocked by Watergate. Three years after witnessing the murder of a leading senator atop Seattle's Space Needle, reporter Joseph Frady (Warren Beatty) begins digging into the mysterious circumstances surrounding the killing—and stumbles into a labyrinthine conspiracy far more sinister than he could have imagined. The Parallax View's coolly stylized, shadow-etched compositions by acclaimed cinematographer Gordon Willis give visual expression to a mood that begins as an anxious whisper and ends as a scream into the void. The disc includes a 4K Restoration, along with the following bonus features: New into by director Alex Cox; Two interviews with Alan J. Pakula; Gordon Willis featurette; Interview with Pakula assistant Jon Boorstin; Essay by critic Nathan Heller.
Posted by D.M. Anderson at 8:56 AM