TOURIST TRAP and Your Own Personal Mr. Slausen 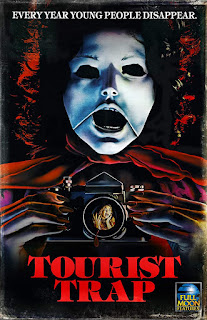 It’ll be a sad day if and when physical media goes away completely, as millennials love to smugly predict. Not to sound like yet-another curmudgeonly Boomer, but the older I get, the cooler relics of the past become...vinyl records, brick & mortar video stores, pop culture collectibles.

Kids today - I can’t believe I just said that - totally missed-out on the tactile joys of Kiss records that came with stickers and honest-to-goodness prizes buried at the bottom of cereal boxes. Sure, you can stream 1979’s Tourist Trap - even the Riff Trax version - for just a few bucks. But since the film is as enjoyably archaic as the giant VHS box Full Moon Features has bestowed us with, what would be the fun in that? Throwing-in a prize you can’t get anywhere else, I don’t see how any self-respecting cult horror fan can pass this up.

Said-prize is a three-inch action figure of Mr. Slausen, the telekinetic loony played by Chuck Connors in Tourist Trap. Done-up in bib overalls and clutching a shotgun, it doesn’t really resemble Chuck much, but the film is just obscure enough that horror buffs who know their shit will love having a collectible that isn’t likely to be fighting for space with Pop Funko dolls at Hot Topic. Too bad a ‘Becky’ figure isn’t offered. Since dolls are expressionless as Tanya Roberts (who plays Becky), it would have been a dead-ringer.

Speaking of performances, they run hot & cold, like the film itself. Roberts is just one of five interchangeable twenty-somethings who get stranded in a dilapidated mannequin-filled museum in the middle of nowhere. It’s run by Mr. Slausen, who’s not-only homicidal, but able to terrorize and murder using telekinesis. In a scenery-chewing performance that borders on high camp, Connors is a real hoot and looks to be having a grand old time. His victims, however, are generic caricatures and as dull as dishwater.

With an effective music score, isolated setting and some suitably grimy production design, Tourist Trap plays sort-of like a supernatural variation of The Texas Chainsaw Massacre (and despite a PG rating, is more graphically violent). The numerous scenes involving mannequins - whether they’re moving or not - are genuinely creepy. The climax, in particular, has a haunting, surreal quality that was generally pretty rare for low-budget fright-fests of the time. However, the mood is frequently broken by unnecessary exposition from a killer who talks way too much.

It also must be said that the video quality of the disc ain’t all that great. There are a lot of distracting blemishes and spots, particularly during the night sequences (which is a majority of the running time). Still, the film itself is fun and since mannequins are inherently unsettling, there are just enough spooky sequences that we can forgive the goofier moments.

But best of all, you can now add Mr. Slausen to your collection of Full Moon action figures, which includes Blade, Torch, Jester and the turd-shaped alien from Laserblast. When home alone, you can stage yourself a mini battle royal. Let’s see those stream-happy suckers top that!