THE BEACH HOUSE: What's in Them Oysters??? 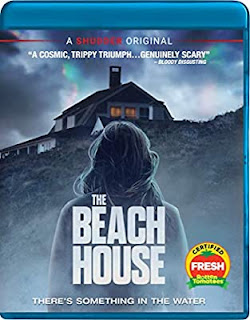 Here’s a little gem that manages to be intimate and apocalyptic at the same time, to say nothing of unnerving. Despite a limited budget and more-or-less taking place in a single setting, The Beach House effectively conveys the ominous implications of its concept, resulting in a chilling film that might linger with you afterwards.

Emily (Liana Lerato) and Randall (Noah Le Gros) are a young couple who arrive at his parents' beach home, only to find old friends of the family, Mitch and Jane (Jake Weber & Maryann Nagel), staying there. But it’s soon obvious that something isn’t quite right...about the older couple, the empty beach, the oysters served at dinner. Afterwards, they all partake in some of Randall’s edibles, and it’s at this point a strange luminous fog rolls in. And yes, there appears to be something in the air, as well as the water and some of the critters living there (including those goddamn oysters!), which Emily discovers the next morning in an invasively nasty scene.

For much of the running time, the film is deliberately paced, understated in tone and sometimes narratively ambiguous, all of which contribute to give later scenes of seat-squirming body horror a lot more visceral impact. By the final act, slow-building dread has created a sense of certainty that things are going to end badly for everyone...and not just the characters. We’re never quite sure what exactly is happening - or why - but it appears to be happening everywhere.Bolstered by down-to-Earth performances and a subtly sinister atmosphere, The Beach House ends up being creepy as hell without ever relying on gratuitous jump-scares or a preponderance of gore (though it gets plenty icky at times). Smart and extremely well-made on a low budget, this is a great little horror film. One thing's for sure...you’ll never look at oysters the same way again.
KITTY CONSENSUS:

MEE-OW! LIKE TAUNTING A MOUSE TO DEATH.
Posted by D.M. Anderson at 4:39 PM