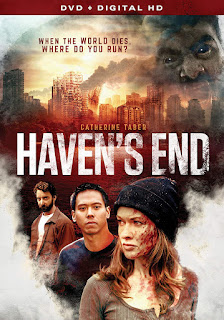 When you don’t have the financial resources of, say, Roland Emmerich, you gotta compensate.

Haven’s End is a low budget apocalyptic thriller with cheap special effects and - with the possible exception of Catherine Taber - pedestrian performances. Like a lot of films made with more ambition than money, it mostly takes place in the woods, essentially reducing the production design budget to zero.

Through histrionic newscasts and a few dubiously-rendered CGI explosions, we learn that every major city around the world has been simultaneously attacked. Disgraced doctor Alison (Taber), fiance Derek (Anthony Nguyen) and pregnant pal Jessi (Megan Hayes) high-tail it out of Atlanta to her dad’s old trailer. Her slacker brother, Kevin (Alex Zuko) and his shrill girlfriend, Hannah (Hannah Fierman) have already been squatting there for some time. Angry and combative from the get-go, Kevin initially refuses to believe the world’s going to hell, but evil doings in the woods ultimately kill that argument.

This drab setting is where most of the story happens, but what makes it interesting is what writer Michael H. Harper and director Chris Ethridge do with the premise. The story is actually pretty well written and one of the more intriguing narrative aspects is that it’s never made quite clear what exactly has happened to the world. At first we suspect a global terrorist attack, then maybe something extraterrestrial or perhaps a demon-influenced zombie outbreak. There are even moments when we entertain the notion that some of these survivors are simply going nuts.

Such deliberate ambiguity might frustrate some viewers, but I personally found it to be a refreshing creative decision: Since you can’t afford to effectively show what’s going on, why not keep the audience just as in-the-dark as the characters? In a way, that uncertainty contributes to the tension. While Haven’s End is technically underwhelming, it compensates with a story that keeps you guessing.