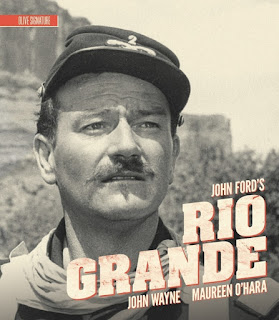 As John Ford/John Wayne collaborations go, I wouldn’t rank Rio Grande among their best. However, this is the film that made The Quiet Man possible, which is one of their best (if not their greatest). Republic Pictures would only agree to green-light Ford's longtime pet project if he agreed to direct Rio Grande first. So in a roundabout way, the film has a certain amount of  historical importance.

Watching the film today with 20/20 hindsight, one suspects maybe Ford was a little less invested in this one than Fort Apache and She Wore a Yellow Ribbon (the other two films of his unofficial “cavalry trilogy”). That ain’t to suggest it’s a bad film by any stretch. Rio Grande actually features one of John Wayne’s more down-to-Earth performances, where he appears to be playing a real character rather than an extension of himself. As Colonel Kirby Yorke, Wayne convincingly portrays an honor-bound career soldier without wrapping himself in the American flag. Considering Wayne’s larger-than-life persona, there’s a weariness to Yorke that’s oddly endearing.

Elsewhere, a very young Ben Johnson is amusing in one of his earliest credited roles as a horse thief who joins the cavalry to evade the law. And of course, Maureen O’Hara is once-again affecting and radiant, playing Yorke’s estranged wife. The story itself is mostly pretty slight, almost meandering at times, particularly during a first half which has the Yorkes butting heads over teenage son Jefferson (Claude Jarman Jr.), who joins the Army after washing-out at West Point. Things pick-up a bit in the second half with a mission to rescue some children kidnapped by Apaches.But despite an overall lack of real action - and a rather dubious depiction of Native-Americans -  Rio Grande remains watchable. The performances are good and the direction is typically solid. The film just isn’t as memorable or exciting as Ford & Wayne’s more storied collaborations. Still, its history is very interesting, which Olive Films nicely encapsulates with this re-issue. Part of their ongoing Signature Series, the disc comes with a big batch of new bonus features, along with an archival making-of featurette carried over from the 2012 release, all of which make this recommended to fans of the two Johns. And if it weren't for Rio Grande, we might not have gotten The Quiet Man, which would have been criminal.

NEW: “TELLING REAL HISTORIES” - The best of the new bonus features, actor/tech-advisor/choreographer Raoul Trujillo discusses the depiction of Native-Americans in Rio Grande and other films.

NEW: “SONGS OF THE RIO GRANDE” - Historian Marc Wanamaker discusses the songs by Sons of the Pioneers.

NEW: ESSAY - By Paul Andrew Hutton, featured in a supplementary booklet as well as the disc.

Rio Grande, part of John Ford's calvary trilogy, is one of the finest westerns ever made (not just as a vehicle to finance the Quiet Man). It featured the first pairing of John Wayne and Maureen 'O Hara and they displayed their on-screen magic immediately. It is also a film about the tragic after effects of the Civil War that tore our country apart. Lastly, it is a beautiful story of a son who yearns to show his parents that he can succeed in the US Army despite failing at West Point. Wayne plays an older character in this and he is as once bold, brassy and tender. A missed Oscar nomination for sure. I'm sorry to say your review is lacking. It seems we watched two different films.