The Real Villains of JAWS 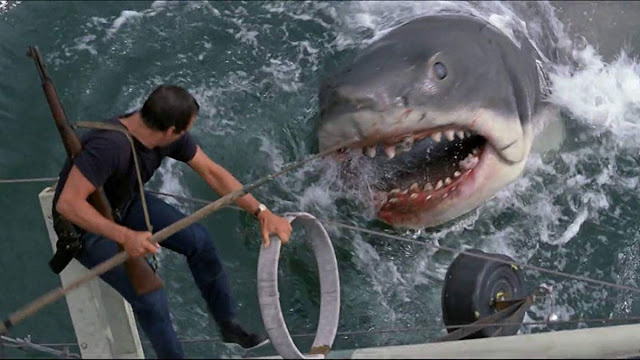 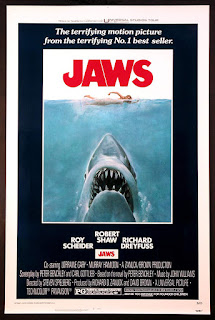 Four-and-a-half decades after it first scared the living shit out of me - tossing my popcorn at the sudden appearance of Ben Gardner’s eyeless head - Jaws remains my favorite film. I saw it at least a half-dozen times in a theater and have long-since lost count of how often I’ve revisited the film over the years.

Even though I practically know the movie by heart - every scene, every line of dialogue - it never gets boring and I still discover some aspect I never noticed before. For example, in the classic scene where Quint (Robert Shaw) and Hooper (Richard Dreyfuss) are comparing scars, there’s a brief shot of Chief Brody (Roy Scheider) starting to lift his shirt to share a scar of his own, but then changes his mind. Since he was a New York City cop just before moving his family to comparatively quiet Amity Island, his somber, self-conscious expression suggests the scar might be the result of a bullet wound.

Or hell, maybe he just had his appendix removed. My point is there’s always been more to Jaws than a ravenous shark. Thematically rich and allegorical, it’s also a film with many subtle, understated moments.

You know, just writing about Jaws makes me wanna pop the movie into my player and watch it again.

Once again, I discovered something new about Jaws, but this time it changes my whole perspective. It’s still the greatest film ever, but now I find myself asking who the real villain really is.

At one point, Hooper and Brody discuss the theory of ‘territoriality,’ in which a shark will remain in an area where the feeding is good. So really, all the good citizens of Amity have to do is stay the fuck out of the water for a few days and the shark will move on. But with the Fourth of July coming, Mayor Vaughn refuses to close the beaches. That, however, doesn’t make him the villain, just another dumbfuck politician in denial (and probably a Republican).

And what about Mrs. Kintner, the grieving mother who puts a $3000 bounty on the shark after it gobbles down her boy? Sure, Alex’s death is tragic, but it ain’t like the shark leaped onto the beach and snatched him away. Alex was in his house. That’s like putting a cheeseburger in the backyard and getting pissed at your dog for having the audacity to eat it. Her actions instigate total chaos as hundreds of fishermen recklessly crowd the waters hoping to cash-in. They end up killing the wrong shark, which was probably just passing by - from Southern waters, according to Hooper - and minding its own business.
What’s really sad is this type of wanton fuckery happens in real life. When celebrity zoologist Steve Irwin was killed by a Stingray, some misguided Aussies retaliated by going out-to-sea and slaughtering dozens of the poor animals that were somehow complicit in an aquatic conspiracy.

But even Mrs. Kintner isn’t the biggest villain in Jaws. That honor, I’m sad to say, goes to Chief Brody (with Matt Hooper as his able accomplice). I wouldn’t include Quint among them because he’s a fisherman by trade and basically a hired gun. Throw in a heaping helping of PTSD - due to his previous shark encounter during the ill-fated U.S.S. Indianapolis mission - and we at least understand his Ahab-like obsession.

After the attack and panic on the Fourth of July, Brody has nothing to gain by killing the shark. Financially, Amity’s summer is over - Brody even says as much - because only the dumbest of fucks would dare go into the same water where three people have already been torn to pieces. With no more swimmers to snack on, the shark would probably be gone in a day or two. Instead, Brody hires Quint’s boat so the three of them can hunt and kill it, which is essentially the same as a home invasion.

Imagine having your groceries delivered to your home. Then a few days later, the same grocer breaks in and tries to kill you for eating the food. Ultimately, the protagonists in Jaws are seeking revenge for incidents they instigated, just like the United Citizen Federation’s war on bugs in Starship Troopers.

Nobody watches Death Wish to cheer-on the three sadistic thugs who break into Paul Kersey’s apartment, rape his daughter and murder his wife. So why do I still snarl “Smile, you son-of-a-bitch” right along with Brody every time I watch him blow the shark to smithereens?

Perhaps the fact that we side with the bad guys is a testament to Jaws’ greatness. It’s a film so well-written, perfectly assembled and impeccably acted that we’re effortlessly manipulated into thinking the three main characters are heroes, especially since they’re so endearing and likable. And like cinema’s greatest antagonists, they don’t see themselves as villains at all.

Neither did I until now. It still doesn’t change my opinion of the film itself. Jaws is as great today as it was in 1975. Of course, we now know that sharks are not mindless eating-machines, but back then, the film unfortunately played a big part in vilifying them as such, to the point where great white sharks have become a vulnerable species. Because of this, original Jaws author Peter Benchley has-since expressed regret over writing the novel. Even so, I’m still able to block out all that baggage and enjoy Jaws for what it is: brilliant, visceral entertainment that feels new every time I see it. Only a perfect film can do that.

Though part of me might be pulling for the shark from now on.