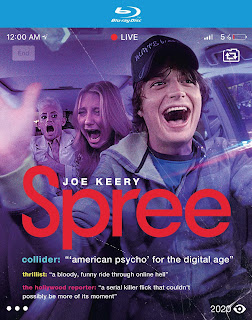 As a teacher who spends most of his time around teenagers, I can assure you there are countless kids convinced that being a professional YouTuber is not only a viable career option, but fortune and glory are just one viral video away. Just like every would-be Eddie Van Halen of my generation were certain they stood apart from all the other would-be Eddie Van Halens.

Rideshare driver Kurt (Joe Keery) is similarly convinced he’s destined to be a social media star with his livestream show, kurtsworld96. However, no one’s watching and it’s easy to see why. Kurt is obnoxious, unfunny and not entirely stable, with an overinflated sense of his own talent and personal appeal. But he’s certain he can achieve viral fame by doing something no other streamers have: killing his rideshare customers.

Spree - also the name of the company he drives for - takes place during one of his shifts and presented entirely through phones and the half-dozen cameras he’s installed in his car. At first, his exploits are kind-of funny, mainly because his victims are such assholes. However, the more we get to know Kurt, the more excruciating the film becomes. Played almost too effectively by Keery, he’s increasingly unlikable, his desperation for attention uncomfortably pathetic.

This is obviously intentional, but unlike such socially maladjusted main characters as Travis Bickle, D-FENS or Joaquin Phoenix’s Joker, we never feel an ounce of empathy for him. Even in black comedy, that’s important. Ultimately, Kurt is as insufferable to the audience as he is to Jesse (Sasheer Zamata), the popular comedian he fixates on (to a creepy level).

I’m pretty sure there are people out there right now - phones in-hand - who are just as fame-obsessed as Kurt. However, Spree squanders the opportunity to have any real fun at their expense. Despite Keery’s excellent, unnerving performance - a far cry from his role in Stranger Things - being around Kurt is mostly just depressing.