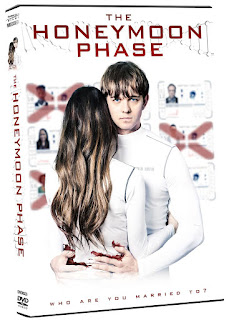 See if this rings a bell...late in The Honeymoon Phase, a young woman finally takes a look at the book her increasingly creepy husband is supposedly writing. But to her horror, it’s just an endless list of baby names, malevolent music swelling with every page she turns. Jack Nicholson doesn’t pop-up from behind to scare the bejeezus out of her, but if you ain’t feeling a little deja vu, turn in your horror card.

Whether or not riffing one of The Shining’s most iconic moments is intended as an homage, the scene plays like it’s some kind of shocking revelation. Funny thing is, we kind-of see it coming. In fact, viewers will see a lot of things coming in The Honeymoon Phase, a derivative sci-fi-horror film that has a few interesting moments, but hampered by a muddy narrative, erratic pacing and two main characters who aren’t remotely interesting.

Eve and Tom (Chloe Carroll & Jim Schubin) are a young couple who pretend they’re married in order to participate in an experiment where they’ll earn $50,000. Called the Millennium Project, the director (Francois Chau) selects them to stay in an isolated, super-high-tech house for 30 days in order to figure out how to keep couples in the ‘honeymoon phase’ of their marriage. Sounds simple enough, but of course, The Director has a more sinister agenda. That ain’t much of a spoiler, folks. Never in the history of sci-fi movies has the offer to live care-free in total luxury come without a catch.

Part of that catch is Tom himself, who almost immediately begins behaving differently...sexually aggressive, indifferent to the book he’s been struggling to finish, forgetting certain aspects of their relationship. And when Eve gets pregnant but doesn’t share his enthusiasm over the prospect of parenthood, he becomes threatening and abusive. Eventually, she’s convinced the man she’s sharing the house with is not the Tom she fell in love with. Yeah, we sort-of suspected that, too, long before she actually does, because we've seen plenty o' movies like this before.

Up to this point, The Honeymoon Phase wavers between interesting and interminable. There are moments when the film appears to be trying to say something about abusive relationships. On the other hand, Tom and Eva are dull-as-dishwater from the get-go, a definite liability considering it’s just the two of them in nearly every scene. And despite being the “antagonist,” Tom is never particularly intimidating. Schubin’s certainly no Nicholson, playing Tom with all the menace of an obnoxious house guest.

Once The Director’s true intentions are revealed, we aren’t surprised, mainly because of the heavy-handed foreshadowing during the first two acts. The climax also raises more questions than answers, the biggest one related to Eve's pregnancy: It is never explained why the fetus grows at an accelerated rate, nor does it have anything to do with the outcome.

The Honeymoon Phase is technically proficient and features nifty production design for a low budget film. But unfortunately, it’s bereft of originality, surprises or characters we’d want to spend 90 minutes with. On the plus side, it did make me wanna watch The Shining again.

FEATURETTES - “Making of The Honeymoon Phase”; “Couples Therapy” (the two stars discuss their characters); “VFX Breakdown” (the recurring hologram of ‘The Handler’)