THE OWNERS and a Bit of Title Trouble 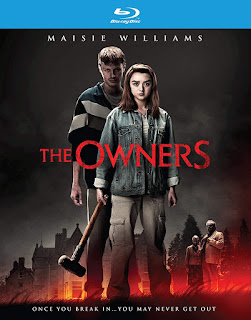 The Owners is an impressive slab of psychological horror with a good premise, solid performances and a lot of tightly-wound suspense. Some of that tension, however, is sort-of undermined by the title. Not that it’s terrible, but it does tend to spoil the surprise at who the real villains are.

In a story of bad guys vs. worse guys, Gaz, Nathan and Terry are three bumbling thugs who plan to rob a safe inside a massive country mansion while the owners are away. Nathan’s beleaguered girlfriend, Mary (Masie Williams), wants nothing to do with the robbery, but gets coerced into sticking around because she has the only car. Unable to open the safe, they decide to wait for the owners and force the combination out of them.

Those owners are Dr. Huggins (Sylvester McCoy) and his wife, Ellen (Rita Tushingham), a kindly old couple that Gaz is willing to torture to get the combination. However, the others actually know the Hugginses and are reluctant to go that far. The best scene in the entire film happens in the basement (where the safe is). Gaz is dangerously psychotic, stabbing Nathan during a fight. But just as he’s about to kill Ellen, Maisie bludgeons him to death with a sledgehammer, saving everybody.

However, Dr. Huggins and Ellen aren’t quite as helpless as they seem and the real torment has just begun. Maintaining a ruse of being helpful and sympathetic, Dr. Huggins slowly turns the tables on them in ways that would be unfair to reveal here. Sure, the title more-or-less has us suspecting something sinister about the Hugginses before we even see them, but there are still plenty of narrative surprises and well-timed shocks. While the performances are all good, McCoy totally steals the film, never breaking the character’s kindly demeanor even after his motives and secrets become known. In fact, his joviality actually enhances the menace.

The conclusion might infuriate a few viewers, though it’s certainly effective. Elsewhere, The Owners is a lot of fun, with a compelling story, interesting characters and tension-filled sequences. Too bad the title gives away the film’s biggest surprise, but that’s a minor quip.

FEATURETTE - “The Making of The Owners”