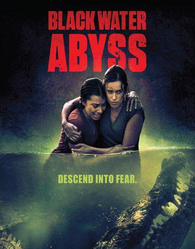 I have a soft spot for killer critter movies - even a lot of the bad ones - so forgive me if I give Black Water: Abyss a more generous review than some might think it warrants. This is a horror subgenre so rife with bargain basement buffoonery that when I come across one which is put together pretty well, it’s hard not to view it favorably.

The film is a sequel to 2007’s Black Water, which I’ve never seen, but don’t fret if you haven't either. Aside from the director and another ravenous reptile, it’s an all new story with different characters. Five standard-issue twentysomethngs go spelunking in a deep underground cave. When a sudden storm causes flash flooding, they find themselves trapped. Making matters worse is the killer crocodile that’s down there with them. Or maybe several; the film doesn’t make it quite clear. If there is just one, he gets around this labyrinthine cave pretty damned fast,. On the other hand, all that exercise might explain his massive appetite.

But hey, Black Water: Abyss ain’t a documentary. It ain’t much of an ensemble piece, either. Aside from a late-inning bit of manufactured drama, character exposition is fairly minimal. We neither like nor dislike any of these kids. And that’s perfectly okay because most of ‘em are just croc fodder anyway. As such, the film delivers the goods, wasting little time getting to the animal action and even generating several moments of claustrophobic suspense. While gorehounds might be disappointed in the lack of on-screen bloodletting, the special effects are decent considering the budget. Wisely shown in only brief glimpses, the croc is more-or-less convincing.Anchored by a chuckle-worthy false ending, Black Water: Abyss is no Jaws, nor is it as much outrageous fun as Crawl. Still, the film is a solid no-frills creature feature...well made, fast paced and entertaining. That’s more than I can say about most movies featuring ragin’ reptiles. Then again, I've always had a soft spot for these things.
KITTY CONSENSUS: