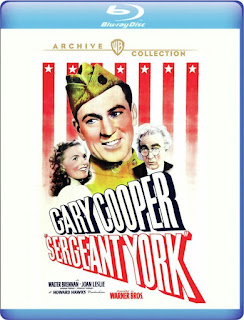 Over the course of 134 minutes, Alvin York raises hell, gets drunk, brawls with buddies, courts young Gracie, is struck by lightning, finds god, charms Gracie, gets drafted, declares himself a conscientious objector, discovers new-found patriotism and becomes a national hero by almost single-handedly capturing an entire troop of German soldiers in World War I.

That’s one hell of a character transformation, and back then, you’d be hard-pressed to name an actor who could pull it off as convincingly as Gary Cooper. A lesser actor would have been all-too-aware of their own performance, whereas Cooper doesn’t appear to be acting, oblivious to the camera. It ain’t that he disappears into the role, but his naturalistic approach perfectly suits the character arc that is the crux of the entire film.

Which is why Sergeant York remains grand, epic entertainment, though not quite the war film history suggests. Not purely a biography, either, it is more of a before-and-after character study triggered by a single life-altering moment. And while the final act - York’s heroic deeds during the war - is certainly the most exciting, watching him get to that point is vital because, by this time, we’ve seen him question both his faith and patriotism, then embrace both after the epiphany that they can co-exist.

But unlike York opening a can of whoop-ass on the Germans, Cooper isn’t flying solo here. As wise & sympathetic pastor Rosier Pyle, this might be Walter Brennan's best role where he isn't a cowboy sidekick. Joan Leslie also shines as love interest Gracie Williams, even though she was only 15 at the time (!). And look quick for Ernest Borgnine, unbilled and onscreen for only a few seconds. Sure-handed direction by Howard Hawks keeps the pace and tone lively, despite an overall lack of any real action during the first two-thirds of the film.

I suppose one could cynically look back at the movie’s celebration of faith and patriotism as archaic, especially since both are currently such polarizing ideals. But 1941 was a different time, when World War II was raging and a little morale building was just what American filmgoers needed. Viewing the film today in any other context is selling it short. An inarguable classic, Sergeant York has been nicely restored for Blu-ray and comes with a small batch of vintage bonus features (outlined below). One of Warner Archives’ more historically-significant releases this year, it’s a must-own for classic film fans.

MEE-OW! LIKE TAUNTING A MOUSE TO DEATH.
Posted by D.M. Anderson at 4:36 PM