BROIL and the Unwelcome Dinner Guest 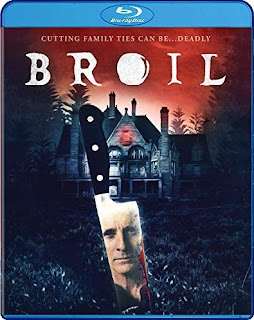 Broil is an oddball horror film that, at-times, feels like it’s going to unfold as a darkly comedic anthology film, with individual chapters featuring their own main characters. However, they’re all part of the same story arc, which is fairly interesting and, at times, surprisingly original. On the other hand, one of those main characters is so terribly realized that she torpedoes the tension whenever she’s on-screen.

The Sinclairs are a dysfunctional family of soul-harvesting demons led by vicious patriarch August (Timothy V. Murphy). One of his daughters, June (Annette Reilly) and her husband want to break from the family, which August will allow in exchange for their oldest daughter, angry teenager Chance (Avery Konrad), who keeps getting suspended from school for threatening staff and classmates.

To Chance’s horror, June agrees to the terms. However, June’s also planning to kill August at a family gathering. Enter ‘The Chef’ (Jonathan Lipnicki), an autistic cook who also happens to be a killer-for-hire (but appears to have an admirable code of ethics). She coerces him into preparing a lavish meal and poisoning August, clearing the way for her to take over leadership of the family. While August is fiendishly clever and appears to use The Chef for his own twisted agenda, he and June both underestimate The Chef’s ingenuity.

When focused on the conflicts between June, August and Sydney, Broil is a lot of morbid fun, with some amusing twists up its sleeve and good performances. Lipnicki, in particular, is terrific, convincingly depicting Chef’s autism without resorting to mere caricature. Conversely, Chance is insufferable, a standard-issue bitchy teenager you’ve seen in countless other movies (horror or otherwise). For a protagonist, she’s dull, generally unlikable and indifferently performed by Konrad, yet given an unhealthy amount of screen time. With just a few story tweaks, Chance could be removed from the entire film and never be missed.Though Chance’s intrusive presence threatens to squash our engagement at key moments, Broil repeatedly manages to bounce back just enough to make her scenes worth enduring. Never particularly scary, the film has an interesting premise, some narrative surprises and, at times, a pitch-black sense of humor.