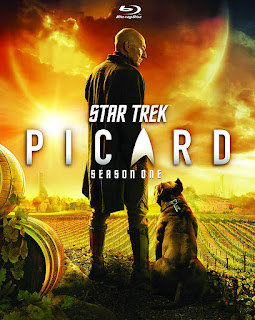 Review by Cuddles, the Coach Potato😹

Think back to some of Star Trek: The Next Generation’s best episodes, the ones which have the most intriguing stories, terrific character exposition and a far-reaching impact on the direction later seasons - as well as the subsequent movies - would take. Picard plays like one of those classic episodes, only it happens to be eight hours long. It’s also the best Star Trek series since TNG.

Picard certainly remembers the past, but doesn’t appear concerned with whether or not viewers do. Allusions to events depicted in TNG, Voyager and Star Trek: Nemesis (the film franchise’s only box office failure) are important elements to the story, which displays considerable confidence that most of us are already familiar with Hugh (a character that appeared in only two TNG episodes), the malevolence of the Borg and the titular character’s relationship with pasty android pal, Data.

However, Picard is not a nostalgia trip and the series does a decent job succinctly bringing newcomers up-to-speed (though more explanation for Seven of Nine’s transformation into a kick-ass space vigilante would have been cool). For the most part, it’s warp speed ahead with a new story that takes place 20 years after Nemesis. Jean-Luc Picard (Patrick Stewart) has retired to his France winery, embittered by Starfleet’s decision to cease aid to the Romulans - whose star went supernova - and banning all synthetic life forms following an android attack on the rescue fleet (which also destroyed Mars).

Then he meets Dahj (Isa Briones), one of two twins that are actually “synths” cloned from Data’s original programming (or something like that). But unlike Data, they are flesh-and-blood, capable of emotions and don’t initially realize they’re androids. When Dahj is killed by rogue Romulans, Picard is compelled to find her twin, Soji (also Briones) before they do. Without Starfleet’s help and permission, he hires a ship and assembles an eclectic crew to take him in search of Soji before the Romulans find her.

However the Romulans already know where she is: Onboard an abandoned Borg cube - known as the Artifact - where she is aiding efforts to restore former Borg back to their old selves. It turns out Romulans despise all synthetic life-forms and a radical faction believes a prophecy which warns they will destroy all life in the galaxy. Narek (Harry Treadaway) gets close to Soji in hopes of learning where the synth homeworld is. His sister, Rizzo (Peyton List), is impatient to wage a genocidal attack.

That’s the nutshell summary for a story that’s far more complex than described. Spread-out over 10 episodes - though I think ‘chapters’ is a more accurate term - the narrative is filled with plot twists, deception, conspiracies, spies and action, as well as a surprising amount of humor and poignancy. It’s a story that requires your constant attention and discourages skipping episodes, especially since it ‘s constantly revealing elements vital to the overall plot. But in the end, our time and dedication is rewarded by an intriguing story, slam-bang conclusion and bittersweet denouement.

Like classic Trek at its best, Picard’s greatest asset is its characters. Obviously, everything centers around Jean-Luc himself and Stewart does a remarkable job, not-only stepping back into the role, but depicting him as older, more vulnerable and disillusioned over what he sees as Starfleet’s betrayal of its own principles. While he’s the focal point of the show, Picard is surrounded by an extremely well-rounded batch of mostly new supporting characters, with a few old friends popping up from time to time. His “crew,” in particular, is unlike any we’ve seen in previous series, but all of them have unique personalities and fascinating back-stories (most with significant character flaws of their own). I especially liked Michelle Hurd as Raffi, a bitter former Starfleet colleague of Picard’s who’s battling a lot of personal demons, and Santiago Cabrera as Rios, a freelance pilot Picard hires.

A few familiar faces return, but most are glorified cameos and only Jeri Ryan (as ex-Borg Seven of Nine) is an integral part of the action (literally). Despite all the obligatory nods to the past, Picard is forward-thinking, a different animal with a look and tone far-removed from previous series, including the frequent use of “colorful metaphors” once deemed archaic in Star Trek IV (one of the biggest laughs comes from someone imploring Picard to “shut the fuck up”). This is the best show CBS All Access has offered so far and plays even better on these binge-worthy discs, which are supplemented by a slew of great bonus features.

FEATURETTES - “Aliens Alive: The xBs” (make-up effects for the recovered Borg); “Picard Props” (smaller props made for the show, many inspired by previous series); “Ser Me Up” (set design); “The Motley Crew” (casting the main characters, featuring interviews with actors and producers); “Make It So” (the story behind creating the series).

STAR TREK: SHORT TREKS - “Children of Mars” (one of the episodes from the Short Treks web series; this one is relevant to the primary plot in Picard...though not essential viewing).
KITTY CONSENSUS:

MEE-OW! LIKE TAUNTING A MOUSE TO DEATH.
Posted by D.M. Anderson at 8:29 PM