RYUICHI SAKAMOTO: CODA: The Life of a Legend 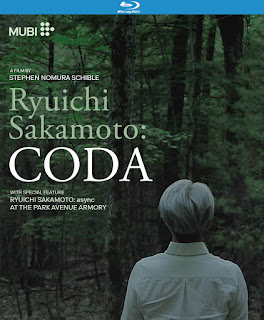 If the name doesn’t immediately ring a bell, some of his music might. On this side of the Pacific, Ryuichi Sakamoto is best known for his scores in such films as Merry Christmas Mr. Lawrence, The Last Emperor (for which he won an Oscar) and most recently, The Revenant.

But in Japan, he’s been a prominent musician & composer for decades, both as a solo artist and with the synthpop band, Yellow Magic Orchestra. Much older now and a recent cancer survivor, Ryuichi has recommitted himself to exploring unique ways to make music. Aside from his career, he remains an outspoken anti-nuclear activist.

Despite it’s slightly ominous title, Coda provides an interesting look at his post-recovery career, such as an ongoing quest for bizarre new sounds, infusing nature into his music and performing a concert using a battered piano recovered from the ruins of the 2011 Tsunami. The film also delves into his early days as a pop star, which segued into an impressive career as a film composer (and sometimes actor). For movie fans, his anecdotes of working for the likes of Bernardo Bertolucci and Alejandro Iñárritu will be the most interesting part of the film.

Not that the rest is dull. While his music outside of film scores is definitely an acquired taste, Sakamoto’s creative process is fascinating, using samples, walls of computers and synthesizers to shape his unusual compositions. He also speaks at-length about issues important to him and which occasionally influence his music. A live performance of one of his darkest pieces - featuring soundbites from J. Robert Oppenheimer (father of the atomic bomb’) - is a prime example.

Aside from his cancer battle, Sakamoto remains mostly guarded about his personal life, which seems to be consumed by music, anyway. Throughout the film, he’s charming, humble and obviously grateful to be alive. We also get the impression he treats each new composition like it could possibly be his last. Here’s hoping this film (and the accompanying concert) isn’t his coda.

“RYUICHI SAKAMOTO: ASYNC AT THE PARK AVENUE ARMORY” - A concert in support of his most recent album, async. Some of this music might redefine avant garde for you, making The Residents sound like Michael Buble.
KITTY CONSENSUS: