Nostalgia & Irony in THE LAST BLOCKBUSTER 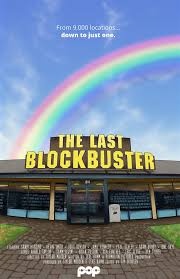 Review by Fluffy the Fearless😹

It’s with no small amount of irony that the corporate monster which essentially wiped-out the mom & pop video store is now on the brink of similar extinction. What was once a 9,000 store franchise has dwindled down to just one, located in the small town of Bend, Oregon (my neck of the woods, by the way).

What’s doubly ironic is, even though Blockbuster homogenized home video and played a huge role in killing drive-in theaters, what I mostly felt while watching this film was warm, longing nostalgia. After all, Blockbuster was an indelible brand name and changed the way we watched movies at home, whether we wanted it to or not. For an entire generation of movie lovers, it was a big part of their childhood, the way drive-ins were part of mine.

But the biggest irony, as The Last Blockbuster joyously shows, is that the lone remaining store has become world famous, not only for putting the name back in the spotlight, but essentially becoming the very mom & pop video store Blockbuster all-but-killed decades earlier. It’s managed by Sandi Harding, who tirelessly keeps the place stocked and running with the help of her large family, all of whom have worked there at one point or another (and many who still do).

Interspersed throughout her daily routine are testimonials from others in the community, as well as interviews with various familiar faces who grew up in the age of VHS, when Blockbuster was a big part of their lives. Most have charming anecdotes, while a few comedians’ attempts to be funny fall flat (such as Doug Benson’s overlong, laugh-free tour of the store).

Concurrently, the film also chronicles the franchise’s rise, mercilessly pushing-out competitors in every neighborhood they invaded (at one point, opening a new store every 17 days). Equally fascinating is Blockbuster’s slow, agonizing fall, not just because of changing technology and succumbing to up-&-comers like Netflix, but a plethora of poor corporate decisions. It’s also clear not everybody mourns its downfall as much as those still clinging to their membership cards.

The film even manages to create a fair amount of suspense. The Hardings don't own the Blockbuster name and must appeal to parent company Dish Network every year in order to remain in business. Despite all the media attention, community support and becoming a tourist attraction, the store's long-term future is always uncertain, which we see as Sandi anxiously awaits a return call from corporate headquarters.

So while The Last Blockbuster maintains a feel-good vibe, there’s a dash of poignancy beneath the surface. Informative, congenial, funny and surprisingly affecting, the film is most-highly recommended for anyone nostalgic for the weekends when they walked out of their local Blockbuster with an armload of tapes or discs. And if you happen to live in Bend, Oregon, you know what your next rental should be.

MEE-OW! LIKE BEING UNLEASHED IN A BIRD SANCTUARY.
Posted by D.M. Anderson at 4:24 PM