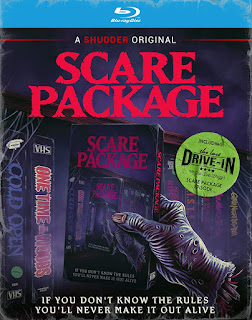 After finishing Scare Package with my daughter, Lucy, she simply said, “Wow, that was completely insane from start to finish.” In other words, she liked it a lot. So did I.

Produced on an obviously limited budget, what it lacks in polish is compensated by sheer exuberance and audacity. Horror anthologies are always a risky endeavor and most end up being wildly inconsistent. But not-only does Scare Package feature far more hits than misses, the whole thing is generally played for laughs. And for the most part, it earns them.

Sure, poking fun at horror tropes is kind-of like shooting fish in a barrel, but it’s clear the legions of writers, directors and producers who put this together have a lot of love for the genre. In a way, that sincerity - backed by some pretty clever writing - is what makes the film so constantly amusing.

There are seven stories counting the framing device, which centers around an old video store run by horror buff “Rad” Chad (Jeremy King), who runs his mouth non-stop as he trains a new clerk, Hawn (Hawn Tran), and puts up with obnoxious regular customer, Sam (Bryon Brown). Their banter and bickering between segments is generally pretty damn funny. Then unexpectedly, the framing device becomes the final story, a climax that turns into the ultimate meta-movie and features a welcome cameo by Joe Bob Briggs.

For the most part, the stories in-between are just as amusing and the film even has an opening act, so to speak. Appropriately titled “Cold Open,” it features a guy who laments his job as the minor character who sets the stage for horror then disappears from the rest of the film (which he actually ends up doing). Other stories send-up various subgenres, such as body horror, werewolves, possession films and, of course, slasher movies. The wonderfully-titled “The Night He Came Back Again, Part IV: The Final Kill” is a hilarious parody of the unkillable killer and the film's best segment.

There’s even room for satiric targets unrelated to horror, such as nerds, TV binge-watchers and the toxic masculinity seen in films like Fight Club. The only real clunker in the bunch is “Girls Night Out of Body,” which has three ladies who turn into monsters after sharing a forbidden lollipop. It’s also the only story that isn’t blatantly comedic in tone.

Elsewhere, the gags & gore come fast and furious. Sometimes the dialogue is juvenile, but more often than not, it’s deceptively clever and often laugh-out-loud funny. The same could be said about the performances, which range from amateurish to spot-on. King, in particular, is hilarious, which is a good thing since his character is essentially the glue that holds everything together, especially during the final story. And subtle, the film ain’t, especially in the bloodletting department. The violence is so over-the-top that it becomes part of the humor, much like Peter Jackson’s early horror comedies.

All too often, movies this self-aware end up being too enamored with themselves, like someone in love with the smell of their own farts. However, Scare Package never plays like it’s superior to the genre it’s having fun with. There’s a earnestness to it that’s as endearing as it is amusing. With a charming (and appropriate) ‘80s aesthetic, this may not be the best horror film I’ve seen this year, but it’s certainly the funniest.