TO YOUR LAST DEATH: Sawnimation 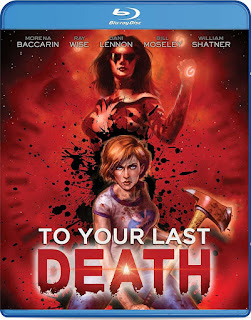 Review by Fluffy the Fearless

Cyrus DeKalb (Ray Wise) is a psychotic, megalomaniacal CEO who really has-it-in for his four estranged kids, especially Miriam (Dani Lennon), who once publicly embarrassed him. At the beginning of To Your Last Death, she’s the only one left alive, having escaped his corporate tower. Since she’s covered in blood and clutching an axe, she’s suspected of doing all the killing.

However, a sexy, time-bending entity known as Gamemaster (Morena Baccarin) offers her a chance to go back in time to try and save her siblings. The only catch...Miriam has to make it entertaining because a batch of Gamemaster’s buddies are wagering on who wins this time. So Miriam ends up back at the tower and only she knows Dad is planning to kill them all, with the help of some vicious henchmen and a variety of technologically-elaborate traps.

So yes, the film unfolds like an animated variation of the Saw franchise. Yet it’s not fully animated. To Your Last Death is more of a motion comic, maintaining an aesthetic similar to a colorful graphic novel. I suppose that style suits the material, though it does tend to be a distraction during the more action-oriented scenes, such as numerous segments when characters are running through the halls. They look like Scooby and the gang being chased by a ghost.

Still, the film has its moments, mostly gory ones. Easily as graphic as any Saw film, many of the death scenes would be stomach churning if depicted through live action. Instead, the splatter has a surreal quality that certainly fits the tone of the story. The characters are also pretty well realized, both visually and expositionally. Of course, all the women have perfect figures and huge tits, an adult cartoon trope you’d think would have run its course by now. On the other hand, the decision to make Cyrus look exactly like Ray Wise is a stroke of genius (a good chuckle for those that know who he is).