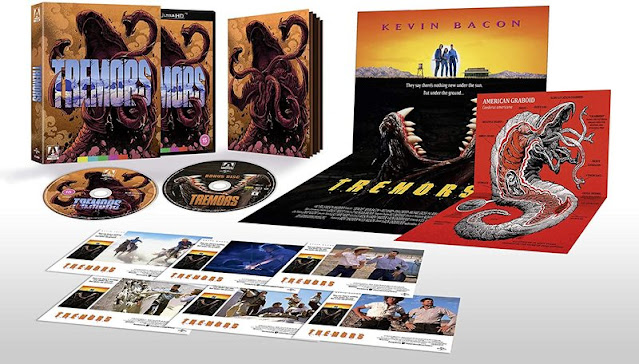 A pulse-pounding love letter to 1950s creature features that delivers horror and humor in equal measure, Tremors is a bonafide cult classic that has grabbed audiences' affections ever since its release and spawned a successful franchise that continues to this day. Good-ol'-boy handymen Val (Kevin Bacon) and Earl (Fred Ward) are sick of their dead-end jobs in one-horse desert town Perfection, Nevada (population: 14). Just as they're about to escape Perfection forever, however, things start to get really weird: half-eaten corpses litter the road out of town; the phone lines stop working; and a plucky young scientist shows evidence of unusually strong seismic activity in the area. Something is coming for the citizens of Perfection… and it's under the goddamn ground! Bursting with indelible characters, quotable dialogue and jaw-dropping special effects, Tremors is back and bigger than ever in this 4K-restored and fully loaded collectors' edition.

Just in time for the best holiday of the year, Chris Roe Management and Tea Time Productions will launch The Chattering Hour Youtube show and podcast hosted by Nicholas Vince (Hellraiser, Nightbreed).  Each week, Vince will delve into entertainment in the horror and thriller genre and chat with special guests.  Initial guests will include Traci Lords (Excision, Cry-Baby), Malcolm McDowell (Bombshell, “Mozart in the Jungle”, A Clockwork Orange), Kathleen Kinmont (Bride of Re-Animator, Halloween 4), Courtney Gains (Children of the Corn) and best-selling author Daniel Kraus.  The weekly Youtube show and podcast will debut this Thursday October 8, 2020. 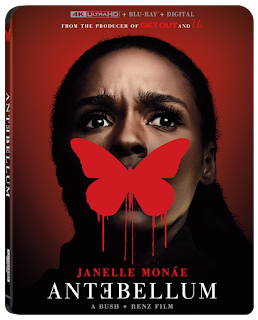 ANTEBELLUM arrives on 4K, Blu-ray, DVD, Digital, and On Demand 11/3
Successful author Veronica Henley (Janelle Monáe) finds herself trapped in a horrifying reality that forces her to confront the past, present and future – before it’s too late. A horrifying, suspenseful thriller comes home when Antebellum arrives on 4K Ultra HD Combo Pack (plus Blu-ray and Digital), Blu-ray Combo Pack (plus DVD and Digital), DVD, Digital, and On Demand November 3 from Lionsgate. The film is currently available on Premium Video On Demand and was the top grossing title over the first two weeks of its debut. Featuring an all-star cast including Janelle Monáe (Hidden Figures, Moonlight, Harriet), Eric Lange (TV’s “Escape at Dannemora,” “Narcos,” “Lost”), Jena Malone (Contact, The Hunger Games: Catching Fire, The Neon Demon), Jack Huston (Kill Your Darlings, American Hustle, Ben-Hur), Kiersey Clemons (Dope, Sweetheart, Neighbors 2: Sorority Rising), and Gabourey Sidibe (Precious: Based on the Novel ‘Push’ by Sapphire, TV’s “Empire,” Tower Heist), and the film aims to spark a “new and innovative way of talking about modern issues” (Janelle Monáe). Ultra 4k HD, Blu-ray & DVD will include never before seen deleted bonus scenes and the ability to go back and catch all the clues you may have missed in the first viewing. Antebellum is sure to ignite some really animated conversations around the dinner table this upcoming holiday season.” 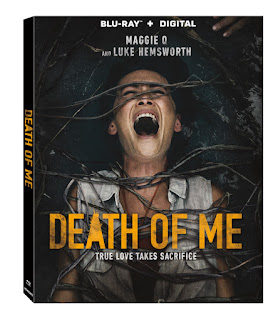 DEATH OF ME on Blu-ray and DVD 11/17
Vacationing on an island off the coast of Thailand, Christine (Maggie Q) and Neil Oliver (Luke Hemsworth) awake hungover and with no memory of the previous night. They find footage on Neil’s camera, and watch, horrified, as Neil appears to murder Christine. With 24 hours until the next ferry and a typhoon threatening the island, Christine and Neil attempt to reconstruct the night’s events—and are snared in a web of mystery, black magic, and murder. True love takes sacrifice when Death of Me arrives on Blu-ray™ (plus Digital) and DVD November 17 from Lionsgate. The film is now available to purchase On Demand. From critically acclaimed horror director Darren Lynn Bousman, who directed Saw II, Saw III and Saw IV, Death of Me stars Maggie Q (TV’s “Nikita,” “Designated Survivor,” Divergent), Alex Essoe (Starry Eyes, The Drone, Midnighters), and Luke Hemsworth (TV’s “Westworld,” Thor: Ragnarok, Crypto).
Posted by D.M. Anderson at 6:41 PM