REVERSAL OF FORTUNE Leaves a Scar 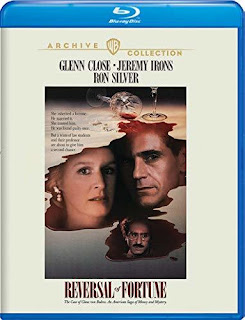 There’s a good chance Jeremy Iron’s legacy will be defined by Reversal of Fortune and, to a lesser extent, The Lion King. Not to take away from his impressive body of work on both stage and screen, but his performances in these two films left an indelible mark on popular culture. And as it happens, they are irrevocably linked.

Irons’ voice-work in The Lion King made Scar one of Disney’s most memorable Disney villains. Yet the Scar we know and hate wouldn’t exist if not for Irons’ Oscar winning portrayal of Claus von Bulow in Reversal of Fortune. It’s no secret that Simba’s conniving uncle is an exaggerated homage, right down to copping one of Irons’ most memorable lines as an in-joke (“You have no idea”).

Since the outcome is a given, it’s the strength of the performances that make Reversal of Fortune worth watching. What’s sort-of ironic is even though it’s well established that Claus von Bulow was almost universally hated after being found guilty for killing his wealthy wife, Sunny (Glenn Close), Irons manages to make him an almost sympathetic character, at-least compared to her. The film’s unreliable narrator, Sunny is in a coma - which she never awakens from - at the beginning of the film. But through flashbacks, the film paints her as a vindictive, selfish, high-maintenance, suicidal addict.

Beleaguered as he may be, Claus may very well be guilty, but the lawyer he hires to write an appeal, Alan Dershowitz (Ron Silver), certainly earns his fee by planting seeds of doubt over the original verdict. With an abrasive personality, Alan’s not all that likable either. Then again, neither was the real Dershowitz, meaning Silver plays him perfectly.

Reversal of Fortune has no real heroes or villains, nor is the narrative all that revelatory. It’s a film driven almost entirely by the three lead performances, and as such, remains enjoyable and engaging, despite the outcome being a foregone conclusion. If nothing else, it’s amusing to see where the inspiration for Scar came from.