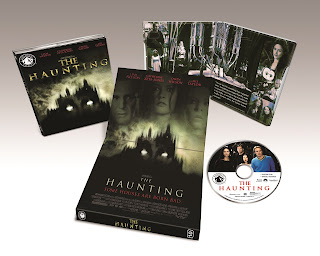 The Haunting is an odd choice for the Paramount Presents series (#10, for those of you collecting them). It made box office bank, but was hardly a blockbuster or critical darling. It doesn’t enjoy the classic status of previous films in the series, even on a cult level. There are plenty of other movies from the same era that could better represent Paramount’s legacy.

And if you want to get technical, it wasn't even produced or released by Paramount Pictures. The Haunting was actually an early Dreamworks production, a studio Paramount didn’t own until 2006. On the other hand, this is the first time The Haunting has been released on Blu-ray, which probably trumps my nitpicking. After all, the film must have its share of fans, right?

Well, I know of one fan, for sure. My wife loves this film. She’s never been what you’d call a big horror lover and the few she does enjoy tend to be fairly benign in the scare department, with only light violence and even lighter themes. In other words, the kind of movie that won't linger in her head while she’s trying to sleep.

The Haunting checks-off all those boxes...a big, flashy major-studio effort with the best CGI money can buy and an attractive cast (plus Bruce Dern) who normally wouldn’t be caught dead doing a horror film. But despite the presence of Liam Neeson, Lili Taylor, the lovely Catherine Zeta-Jones and the always-obnoxious Owen Wilson, their characters are just talking heads. The real stars of the film are the special effects and production design.

And indeed, The Haunting is constantly interesting to look at. Hill House, a labyrinthine mansion where Dr. Marrow (Neeson) conducts his “fear” experiment, is the most engaging character in the film, with intricate wood carvings in every nook & cranny, cavernous rooms and menacing statues. With the help of elaborate (for the time) CGI, Hill House is practically a living entity.

But as a lot of fright fans will attest, horror and CGI often get along like oil and water. Effectively using CGI in horror is a challenge even today, let-alone 21 years ago. Here, the special effects overwhelm the story - a lukewarm rehash of Shirley Jackson’s novel - and at no point are they really convincing. Hence, there isn’t a single moment that’s remotely scary, or even unsettling.

The Haunting is a lot like a gift shop seashell...elaborately designed, polished to a glistening sheen and very pretty to look at - especially on Blu-ray - but still empty inside. We’re impressed with the production design and maybe even able to enjoy the special effects in the context of when they were created, but it’s ultimately best appreciated by people like my wife. When it comes to horror, she’ll dip her toe in the water now and then, but isn't truly looking to be scared.