BEFORE THE FIRE: Timing is Everything 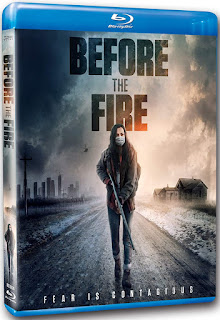 I’ll state the obvious right away. The timing of Before the Fire couldn’t have been more perfect. With a plot centered around a global pandemic, the film was initially released just as we were getting our first taste of the real thing.

Which means the first 15 minutes hit eerily close to home. With an unnamed virus spreading rapidly, all airline flights are grounded and people are evacuating major cities. Before the Fire lacks the budget of a film like Contagion, so the story centers around Ava Boone (Jenna Lying Adams, who also wrote the screenplay), an actress whose career is just starting to take off. As she and photographer boyfriend Kelly Rhodes (Jackson Davis) are fleeing, we learn the apocalyptic implications through chillingly-realistic TV and radio broadcasts.

However, the interest level drops considerably once Kelly dupes Ava into boarding a chartered plane that returns her to their tiny South Dakota hometown. While Kelly goes off to capture the pandemic turmoil on-camera, he arranges for her to stay with his mother and brother, the latter of whom doesn’t like her too much. Ava is also terrified of bumping into her estranged parents. It’s never explained what happened between them, which is a serious narrative liability since her dad emerges as the film’s primary antagonist.

In fact, we don’t learn much about any of these people or their relationships to each other. That leaves the story, which mostly puts the pandemic on the backburner to focus on Ava’s dad forming a militia (about five guys), seizing the Rhodes’ house and shooting anyone who pisses him off. Except for Ava. For some reason, Dad’s hell-bent on bringing her back into the family, even if it means keeping her locked in the basement. It’s at this point when Before the Fire descends into just another woman-in-peril film, and a pretty poky one, at that.

However, the performances are good, particularly Adams, and the climax offers a satisfying slab of poetic justice. But overall, the film never tops its opening sequence, which is uncomfortably compelling. Had the rest of the narrative kept its focus squarely on the pandemic and its psychological impact on the characters, this could have been a small winner. Instead, Before the Fire is mostly dull and forgettable..