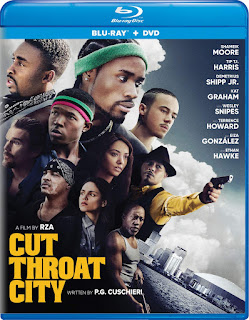 More than just a gritty heist film, Cut Throat City wears its anger on its sleeve. Angry at FEMA’s botched response to Hurricane Katrina, angry at those using the disaster to exacerbate the gentrification of neighborhoods and angry at the overall lack of assistance to countless black families who lost everything. As presented in the film, that anger appears to be justified.

Blink (Shameik Moore) is angry, too. An aspiring comic book artist, he finds himself forced to support his wife and stepchild by dealing drugs with his small crew of friends. But even that isn’t much of a living, so when the opportunity arises to work for dangerous, sadistic local crimelord ‘Cousin’ Bass (T.I. Harris), it feels like his only viable option. Blink and his friends are ordered to rob a local casino, a job which goes awry when police show up almost immediately, resulting in a shoot-out in which they barely get away. Now in debt to Bass, they start robbing other casinos in order to pay him off.

Meanwhile, Detective Lucinda Benoit (Eiza Gonzalez) is in charge of the investigation and suspects Blink’s crew has been set-up by Bass, a plot development that’s fuzzy at-best and the weakest aspect of the narrative. Still, we feel Blink’s desperation as he gets further and further in over his head, surrounded by gangsters, crooked cops and corrupt city officials more concerned with making New Orleans real estate valuable again. He knows he should grab his family and get out of town, but the 9th Ward of New Orleans is his home and ultimately refuses to leave. This leads to a final act that’s as exciting as it is unpredictable, along with a big ‘fuck you’ to FEMA. And just when the viewer thinks Blink’s story is over, we're thrown an absolutely awesome curveball, reminding us of his original artistic ambitions.

Though the narrative tends to sag in the middle, Cut Throat City has epic aspirations and often succeeds, aided immeasurably by the real-life backdrop of Katrina’s aftermath, which not-only fuels the film’s anger, but makes Blink a sympathetic protagonist even as he’s robbing casinos. Though well performed by a great cast, his friends and enemies aren’t nearly as fleshed-out, therefore less interesting. Still, Blink’s buddies are personable enough that we care whether they live or die.

Director RZA’s most ambitious work so far, Cut Throat City is an action film with heart, brains and a justifiable chip on its shoulder. More than just gangsters and guns, it tells a compelling story of people driven to desperation in light of the systematic racism they’ve been subjected to. And damn, what an ending! Another film forced to skip theatrical release due to a disaster of a different sort, this is well worth seeking out.