BLUE RIDGE: Murder in the Mountains 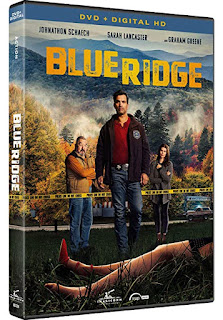 From by Tiger the Terrible😼

The title suggests a western, and in spirit, I suppose it is. However, Blue Ridge is mostly a backwoods murder mystery that plays like a pilot for a potential TV series, though I have no idea if one’s actually on the pipeline. If so, I’ve seen worse.

Johnathon Schaech is Justin Wise, a former Green Beret and the new sheriff of Blue Ridge, one of those tiny Appalachian towns where everybody knows everybody. He took the job so he could be closer to estranged wife Elli (Sarah Lancaster) and spunky daughter Maddie (Taegen Burns). Their relationship is the least interesting aspect of the entire film and never really figures into the plot, in which a woman is found murdered.

The victim is Vivian McGrath, who managed to piss off the entire town with plans to build condos on the land she and husband Lem swindled from her father, Cliff (Graham Greene). So naturally, he’s a suspect. However, Cliff thinks Jeremiah Wade (Tom Proctor) killed her, part of a decades-old feud between the two clans over ownership of the land. We’re made to suspect several characters throughout the story, sometimes because they simply act suspicious.

When focused on the investigation, Blue Ridge is fairly engaging, briskly moving from A to B with workmanlike efficiency, though some of the story’s red herrings are a little ham-fisted. Schaech makes a likably stoic protagonist, while Greene & Proctor are an entertaining pair of redneck rivals. The other characters are merely perfunctory, or in Deputy Thompson’s case, distractingly goofy...like a 21st Century Barney Fife.

With a final showdown that suggests some inspiration from classic westerns, Blue Ridge isn’t particularly memorable, but works in the moment. It’s got a pretty decent story and a main character that seems groomed for weekly television. But even if that ain’t in the cards, the film is an enjoyable enough time killer.

4 BEHIND-THE-SCENES FEATURETTES - Running one to three minutes each.