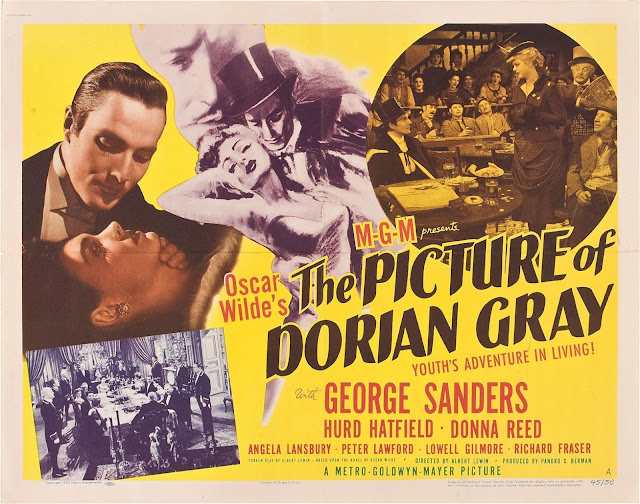 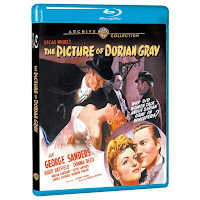 It takes a hell of a lot to truly scare me anymore.

It ain't like when I was a kid and damn near everything terrified me. A few grotesqueries on my long list of nightmare fuel were spiders, lava, quicksand, the dark, large bugs, my neighbor's dog, slugs, monsters, holiday nutcrackers, the high-dive, Grandma's basement, bees, Mom's tomato aspic and entering a dark room without first reaching in to flip-on the light switch.

Some of those fears were groundless, while others grew and festered from personal experience...or movies I watched, such as The Picture of Dorian Gray.

Every summer, my parents used to ship my sister and I to Grandma's for a week or two. She had a old house in Prosser, Washington, a town just big enough to require a traffic light at its lone intersection. While I loved my grandma, she was only able keep us entertained for so long before leaving us to amuse ourselves. My sister and I often played in the basement, where Grandma and Grandpa used to entertain guests before he passed away. There was a full bar, piano, card table, dartboard, television, bookshelves and an ancient console stereo with a massive collection of 78 RPM records. We spent many summer afternoons pretending we were bar owners.

The basement was also where Grandma kept old treasures she couldn't bring herself to get rid of. Rummaging through the numerous storage closets was like going on an archaeological expedition and discovering relics from ancient civilizations. I once stumbled upon Grandpa's collection of Playboy magazines, with issues dating back to the 1950s. At that age, I was less interested in what those old issues were actually worth than gazing in dumbstruck awe at the timeless glory of the female anatomy.

Unless we wanted to share Grandma's love for Days of Our Lives and The Mike Douglas Show, we watched TV down there, too. One time, my sister happened to be engrossed in The Picture of Dorian Gray. I didn't really share her love of old movies at the time - especially black & white ones - so I wasn't paying much attention...at least until the titular painting appeared onscreen for the first time.

In the movie, Dorian Gray (Hurd Hatfield) is a meek, impossibly handsome young aristocrat who poses for a painting by Basil Hallward (Lowell Gilmore). Having captured Gray perfectly, Basil considers it his masterpiece. Also present at the unveiling is Lord Henry Wotton (George Sanders), a cynical cad whose hedonism is renowned around town. Wotton flippantly informs Gray that he'll someday succumb to the ravages of age, but this portrait will retain his youth & beauty forever. Gray openly wishes the opposite were true, which is somehow granted by a mysterious Egyptian statue that happens to be within earshot.

Unfortunately, Gray is gullible and easily influenced by Wotton, becoming a narcissistic douche in the process. His first act of cruelty is viciously dumping the girl he loves (a very young Angela Lansbury), who kills herself the next day. Over the years, Gray remains as youthful as ever, which everyone in the community finds unnerving. The painting, however, depicts him as the monster he's turned into, his once-beautiful image growing increasingly grotesque with every sin he commits, which eventually includes murder. To keep his secret, Gray hides the horrific portrait in a locked room.

Looking like something from a Cannibal Corpse album cover, the painting is presented in full color at key moments, heightening its shock value and scaring the shit out of me. Hell, Dorian's face was kind-of unnerving before his image began morphing into a monster.

I found The Picture of Dorian Gray truly terrifying, the first movie I remember giving me nightmares. Furthermore, Grandma's basement was suddenly a scary place, especially since many of the walls were adorned with replicas of similar old paintings, the creepiest one being a couple of cherub-faced children staring back at me. With only one ground-level window, the basement was already dimly-lit, even with lights on. But with my new-found fear of ancient portraits, I refused to ever go down there again once the sun went down.

So old paintings joined my long list of childhood fears. Not that I crapped myself whenever I saw one, but I found them intimidating, particularly when used as horror fodder. An especially terrifying Night Gallery episode featured Roddy McDowell as a spoiled punk who inherits the family estate after killing his ailing uncle. Then he notices that an old painting of the family graveyard starts changing. First, there's a freshly-dug grave, then an open casket containing his dead uncle, followed by a corpse shambling toward the the mansion. The last shot of the painting shows the corpse at the door. By then, McDowell's character has gone completely mad and yours truly was covering his eyes in horror.

As a heavy metal fan, some of the artists I listen to write horror-based songs to go with their image. Much of the time, it's either tongue-in-cheek or supremely goofy, especially the stuff from the 80s. But the one song that I found truly scary was the title track from King Diamond's album, Fatal Portrait. The song tells the story of a fanatical, abusive mother who's obsessed with painting a portrait of her young daughter, Molly. She keeps the child locked in the attic, and with every stroke she paints, Molly grows weaker until she finally dies. But her spirit re-awakens in the painting, seeking revenge on her terrified mother. The lyrics, coupled with the album's cover art, were really creepy.

With age comes wisdom, of course, and most of my old childhood fears seem silly and quaint now (except spiders, because fuck spiders). Today, I'm more preoccupied by decidedly "adult" terrors: tax season, climate change, the thought of my in-laws moving in, my daughter's first date, unexplained lumps, scary engine noises, identity theft, and the big one, an increasing awareness of my own mortality.

Still, it's no small coincidence that absolutely none of the decor in my house has ever consisted of paintings featuring human subjects. In fact, when Grandma passed away years later and the family was dividing what she left behind, I vehemently refused to take home anything from that basement, especially the scary-ass shit on the walls. Mom kept the painting of those cherub children, though, which apparently evoked much fonder memories in her than it did in me.

I'd mostly forgotten how Dorian Gray's painting once traumatized me until recently revisiting the film. Seeing it again, this time with adult eyes, I was able to appreciate the stunning deep-focus cinematography and wonderful performances, especially Sanders as Wotton, who I now realize is the film's true villain. I'm not easily scared by horror movies, anymore, mainly because I've seen so many that I've become somewhat jaded. But even 45 years later, when that hideous painting flashed across the screen in all of its hellish color, it still made me jump.

For over 100 years, Oscar Wilde's original novel has been adapted countless times, but this version remains in a class by itself. It may not be considered a true horror film by some, perhaps because the look and tone more closely resemble a lush period drama. But by being selective with its shocks, we're caught off-guard, rendering its moments of terror all-the-more potent. All these years later, The Picture of Dorian Gray still has the power to inspire dread.

MEE-OW! LIKE BEING TURNED LOOSE IN A BIRD SANCTUARY
Posted by D.M. Anderson at 10:26 PM