A CIAMBRA: Life on the Fringes 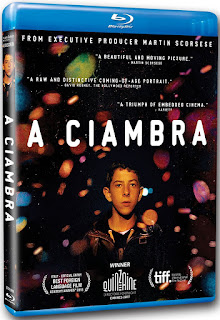 The Amatos are a large, multi-generational family of gypsies living in Romani. Pio, a street-smart 14-year-old, idolizes his older brother, Cosimo, who helps support the family by stealing anything he can get his hands on, then selling it to Italian mobsters or local African refugees. When Cosimo gets caught and arrested - along with his father - Pio takes tries to become the man of the family, boosting cars, stealing luggage and fencing whatever he finds.

Though he talks & acts tough - smoking, drinking and hanging out at the same bars Cosimo did - Pio is still just an impressionable boy and, despite some car-boosting tips from his brother, quite naive and inexperienced. He comes to rely on help from Cosimo's African friend, Ayiva (Koudous Seihun), to fence whatever he manages to steal.

Eventually, circumstances force Pio to make some extraordinarily difficult choices between friendship and family, and clinging to what's left of his childhood versus a life like his brother's, which he'll likely never be able to leave. These quandaries are the crux of A Ciambra, though the story takes a considerable amount of time getting there. A great deal of the film focuses of Pio - who's in nearly every scene - and the world he's been raised in. He's not a particularly nice kid, or even outwardly likable. However, Pio's obviously a product of his environment, and though he seldom shows it outwardly, his love for his family is repeatedly demonstrated through his actions, questionable as they are.

The most interesting aspect of A Ciabra is that the Amatos are a real family playing fictionalized versions of themselves. They actually live in that ramshackle house in the very village most of the film takes place. That writer/director Jonas Carpignano manages to get authentic, convincing performances out of all of them is quite remarkable (a stunt Clint Eastwood failed to do with The 15:17 to Paris). Pio himself is particularly impressive, able to carry most of the movie's emotional weight on his inexperienced shoulders.

The episodic narrative does meander quite a bit. Just because what we're seeing looks, sounds and feels authentic - augmented by intimate hand-held camera work - doesn't mean it's always interesting. Pio's relationship with Ayiva is engaging, but hanging out with the Amatos - especially his siblings - is sometimes an endurance test. However, the third act, particularly the very last shot, packs a hefty emotional punch.

Well-intentioned and occasionally revealing, A Ciambra is certainly worth checking out, as it takes a unique approach in showing us a culture that exists on the fringes of society. Considering his age and experience, Pio Amato is also quite a revelation. But its inconsistent pacing, not-to-mention an overall air of hopelessness that hangs over the proceedings, probably discourages repeated viewings.

EXTRA KIBBLES
"A CIAMBRA: THE OTHER SIDE OF THE STORY" - Revealing behind-the-scenes documentary.
FEATURETTE - "From A Ciambra to Cannes"
DELETED SCENES
SHORT: "YOUNG LIONS FOR GYPSY" - This was the basis for the feature film.
TRAILER
KITTY CONSENSUS: