A QUIET PLACE in Horror History 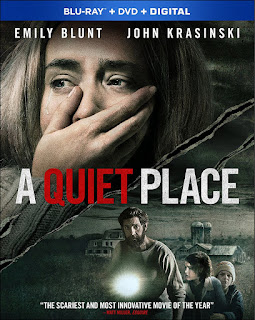 If nothing else, the first ten minutes of A Quiet Place might be the most masterful opening to any horror film ever made. With no dialogue, music or exposition, the audience learns almost everything they need about the apocalyptic implications of the film's central idea and meets every character essential to the narrative...all before the opening title. Had the film been a short subject and ended right there, it would still come to a shocking, satisfying conclusion. The whole sequence is a triumph of minimalist storytelling.

Fortunately, A Quiet Place is just warming up.

In the not-to-distant future, the world has been subjected to a global cataclysm in which vicious, horrific creatures - mostly unseen until the final act - have decimated most of the population. Completely blind, they are drawn by sound, attracted to even the most minuscule noise. Worse yet, they're strong, agile and lightning fast; victims are usually dead before they even knew what hit them.

The story focuses on the Abbott family, who've adapted to survive in silence at a remote farmhouse, though not without tragedy. Their youngest son, Beau, was killed by the creatures, which deaf older sister Regan (Millicent Simmons) still blames herself for. The father, Lee (John Krasinski), spends most of his days trying to contact others through computers and a radio, while also teaching his son, Marcus (Noah Jupe), survival tips and constructing an effective hearing aid for Regan. His wife, Evelyn (Emily Blunt), has-since become pregnant. As the due date nears, the family prepares by trying to sound-proof the basement.

The Abbotts' daily routine makes up the bulk of the first half. Life is a challenge, of course, and the film does a tremendous job reminding the viewer what a typically noisy species people are. To go through life making no sound at all - or face dire consequences - makes the entire story fraught with tension, even during the supposedly routine moments.

Not everything is hunky-dory with the Abbotts, either. Regan harbors resentment towards her dad, feeling like he also holds her responsible for Beau's death. Indeed, it does often seem as though Lee doesn't completely trust her, leaving her behind while he takes Marcus on food gathering expeditions (even though the prospect terrifies the boy). Their relative estrangement sets-up the film's most poignant moment later on.

I remember seeing A Quiet Place in theaters and marveling at how the overwhelming silence in the film encouraged the same from the audience. Hardly anyone dared even crunch their popcorn for fear of breaking the tension, which wouldn't have happened if the film weren't so consistently engaging. Not only is the premise completely unique (how often can you say that about a horror film these days?), it's smart, suspenseful and thoroughly exploits the oppressive silence to great effect, intensifying the dread and obligatory jump-scares. And the monsters, of course, are terrifically nasty creations.

Unlike many recent horror films which generate brief amounts of hype and praise before the next one comes along, I suspect we'll still be talking about A Quiet Place a decade from now. It has the hallmarks of other stand-alone classics of the genre: scary, totally original, lots of fun and definitely worth repeated viewings. On a related note, I sincerely hope they change their minds about doing a sequel (which has already been announced). A premise like this is truly effective only once.

MEE-OW! LIKE TAUNTING A MOUSE TO DEATH
Posted by D.M. Anderson at 4:14 PM