THE JURASSIC DEAD is a Thing 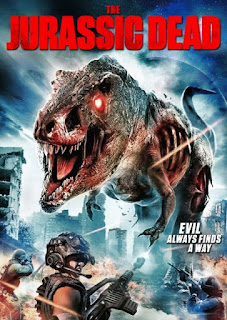 From the director of Tsunambee and the studio that brought you Shark Exorcist comes the epic mash-up you've been waiting for. So why are you still reading this? If the title doesn't tell you all you need to know, perhaps you're already familiar with some of Wild Eye Releasing's crazy catalog.

That being said, The Jurassic Dead more-or-less delivers on the promise of its title, with a plot so absolutely bonkers it makes your typical mockbuster from The Asylum look like a Merchant Ivory film. For example, In the first ten minutes alone:
But don't worry kids...it'll all make sense in the end...sort-of. The mercenaries and kids end up trapped in a fortified facility run by the demented Dr. Borge, who now resembles a wheelchair-bound cross between Immortan Joe and Darth Sidious. Borge plans to nuke major cities before unleashing his herd on undead dinosaurs on the world. Before that, however, he turns a zombie T-Rex loose on his trespassers. In my favorite scene, a mercenary meathead drops his weapons and knocks-out the beast with a few punches (as though scrapping with dinosaurs comes with the job). But they soon discover you can't a good - or dead - T-Rex down. It continues to mosey throughout the facility, chomping down the cast, who then become zombies themselves.

As to be expected, the special effects are suitably terrible, with nearly every scene looking like it was performed in front of a green screen (even when it doesn't appear to be necessary). In fact, you'll often notice the background can't hold completely still. T-Rex himself (the only dinosaur in the film) is an amusing creation, mostly the work of puppeteers. Characters behave stupidly, scenes change with almost no transition and everything comes to a ridiculous climax.

But you probably already know this, which ultimately makes The Jurassic Dead a hard movie not to enjoy (even the opening & closing credits are funny...both intentionally and unintentionally). Say what you will about its bargain-basement production values, shake your head in disbelief at the laugh-inducing dialogue & cringe-worthy performances, but one accusation you can't level at the film is that it's boring.

You gotta appreciate the sheer exuberance on display here. While not entirely serious in tone, it's mostly free of the cynicism that tends to suck the joy out of similar movies. We're almost certain this is the best they could do on both sides of the camera. Only a goofy post-credits scene suggests anything resembling self-awareness. So, hey...why not?